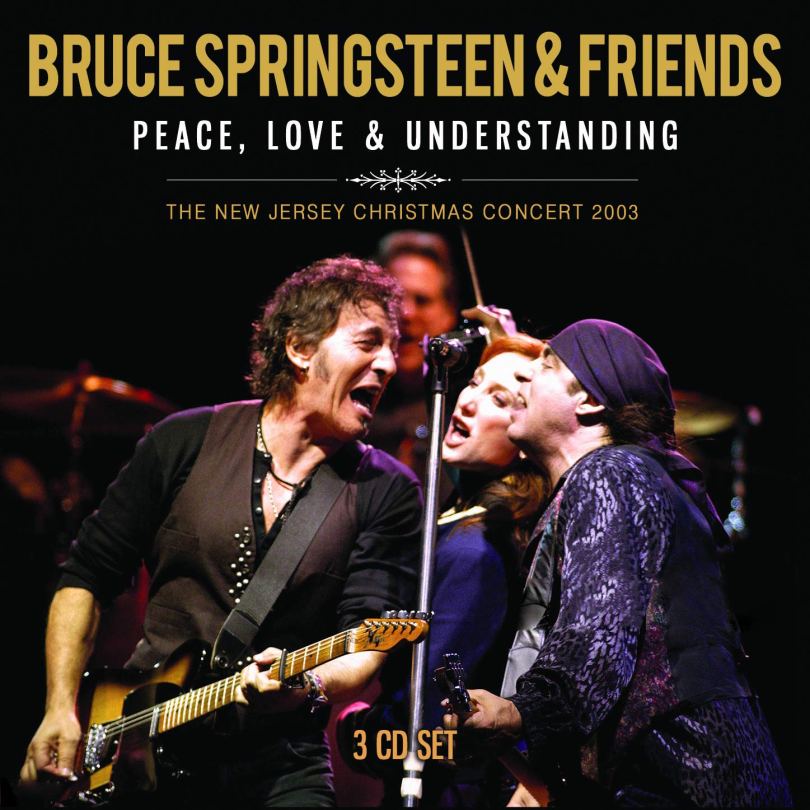 Perhaps it was the holiday season that inspired them. Or maybe it was the venue—Asbury Park, New Jersey, where some of the participants have roots. Possibly it was the fact that the concerts were for charity. Or that so many talented and like-minded musicians had gathered on the same stage. Maybe it was all of the above. At any rate, something special was clearly in the air when Bruce Springsteen and friends performed three nights’ worth of holiday concerts at Asbury Park’s Convention Hall on December 5, 7, and 8 in 2003.

The last, longest, and some say best of those shows was broadcast live and has been bootlegged multiple times. It is being unofficially issued again next month as a three-CD set called Peace, Love & Understanding (a reference to the program’s blistering cover of Nick Lowe’s “What’s So Funny ‘Bout Peace, Love & Understanding”). The album, which features excellent sound and a bargain price tag, is a U.K. release, undoubtedly because copyright laws there put broadcast performances in the public domain, but it’s readily available in the U.S. as an import.

The show—which runs three and a half hours and incorporates backup by the Max Weinberg 7 (Springsteen’s drummer and his Tonight Show band)—opens with two numbers from a gospel choir. Then the proceedings turn to rock and roll. From Bruce’s songbook come several rarely performed tunes, including “So Young and So in Love,” “None but the Brave,” “Seaside Bar Song,” “Thundercrack,” and “The Wish” (his tribute to his mother, who’s in the audience).  He also delivers a nearly 14-minute “Kitty’s Back” and turns lead vocal duties over to the one and only Nils Lofgren for a fine 10-minute reading of “Because the Night,” the song Springsteen wrote with Patti Smith.

There’s more—lots more. Sam Moore of Sam & Dave serves up five songs, among them “Hold On, I’m Coming” and Springsteen’s “My City of Ruins.” The great Garland Jeffreys offers his own “R.O.C.K.” and a dynamic cover of Question Mark and the Mysterians’ classic “96 Tears.” Southside Johnny and Little Steven take center stage for the Springsteen-penned “Talk to Me” and a trio of Asbury Jukes staples authored by Little Steven: “This Time It’s for Real,” “It’s Been a Long Time,” and “I Don’t Wanna Go Home.” Other contributors include guitarist Jimmy Vivino, singer/songwriter Jesse Malin, violinist Suze Tyrell, and rocker Willie Nile.

It all adds up to quite a party—and thanks to the set list, the occasion, and the participants, it doesn’t sound quite like any other Springsteen concert album. Get it while you can.

Will Sexton, Don’t Walk the Darkness. Guitarist and singer Will Sexton hasn’t released a solo album in 10 years, having opted instead to devote his time to session work, writing, and producing. After hearing this gritty, soulful new album, you’ll likely hope that he won’t let a decade pass before taking center stage again.

Sexton sings ’em like he means ’em; and he enjoys superlative backup from New Orleans’s the Iguanas, a quartet of veteran players whose influences include the music of Memphis (where Sexton now lives) and their home city, as well as Tex-Mex, rock, and jazz.

The material—all penned solely by Sexton except for “Don’t Take It from Me,” which he cowrote with the late Waylon Jennings—is rock solid. So is the production: the album may or may not have been recorded live in the studio, but it sounds as if it was. Standouts include the accordion-spiced “Witness”; the catchy aforementioned “Don’t Take It from Me”; the jazzy, sax-flavored “Only Forever”; and the moody, beautifully sung “Oh the Night (Night Owl Calls).”

The Mastersons, No Time for Love Songs. Though this is the fourth solo outing from the husband-and-wife team of Chris Masterson and Eleanor Whitmore, they have mostly spent recent years supporting other artists: they are long-time members of Steve Earle’s band, the Dukes, and they recently contributed to Tanya Tucker’s Grammy-winning While I’m Livin’. Shooter Jennings (son of Waylon Jennings and Jessi Colter), who produced Tucker’s album, subsequently signed on to produce this one.

It’s arguably the duo’s’ best work so far, which is saying a lot. The lyrics, while not overtly political, include lines that sound decidedly of our times. (In the title cut, for example, they sing, “I can’t stand to see a child taken from her mother’s arms,” an apparent reference to what has occurred at the Mexican border.) The fine harmonies and guitar work, meanwhile, recall the music that came out of the Laurel Canyon, California scene in the late 60s and early 70s.