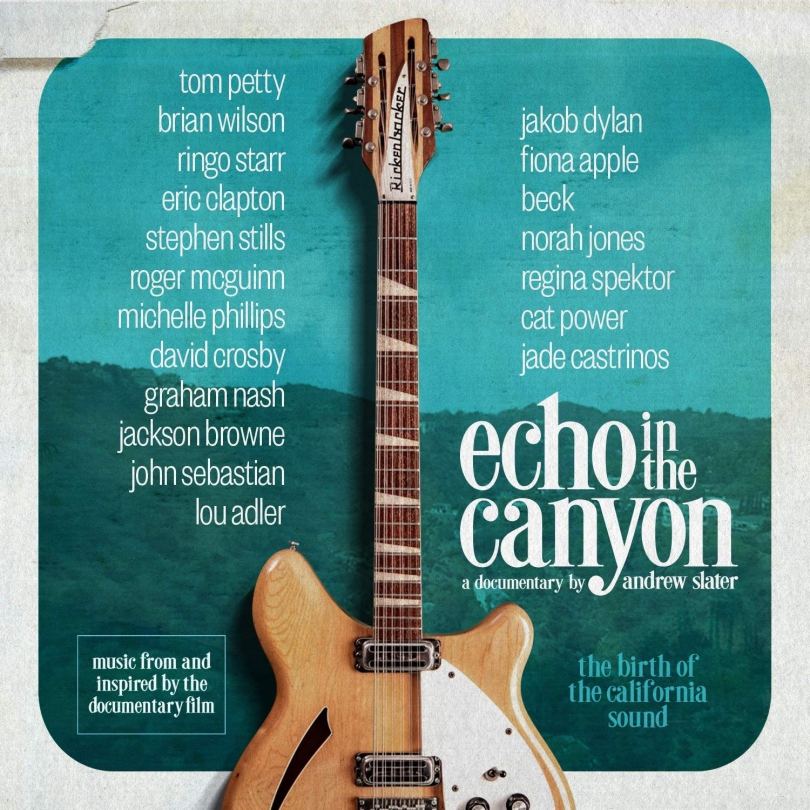 What would happen if many of the country’s leading musicians, singers, and songwriters lived within a few minutes of each other and regularly dropped into one another’s homes to play their latest tunes and trade ideas? You don’t have to guess at the answer because that’s what happened in Southern California’s Laurel Canyon in the mid and late 1960s. It was home to the Mamas and Papas, the Byrds, Buffalo Springfield, Jackson Browne, Joni Mitchell, and many other major artists, and the results helped to produce a golden era of rock, folk, and pop.

Echo in the Canyon, a film that has been available for some months on Netflix, shines a light on this place and time. It finds Wallflowers leader Jakob Dylan interviewing many of the people who were part of or influenced by the Laurel Canyon scene. He also performs some of the most memorable numbers that resulted from it, sharing vocals with assorted artists and backed up by first-rate musicians, including a few who were part of the original community. Dylan—who grew up around this music as a son of Bob—establishes excellent rapport with his interviewees, who do a good job of conjuring up Laurel Canyon’s heyday.

The best parts of the film, though, are the new performances. Instead of trying to update or reinvent the music, the artists pay tribute to it with sprightly covers that capture the magic of the originals while reflecting a bit of their own personalities. They don’t fiddle much with the arrangements, but the performances still sound fresh enough to make you hear this great music from a new perspective.

The soundtrack CD’s list of performers—some luminous, some relatively obscure—is rather inspired, but it’s not quite as impressive as the album cover makes it seem: the image there is the same as the one on the Blu-ray box, and while the artists named on it all show up in the film (some just in interview segments), many of them are not featured on the soundtrack. Still, the vocalists who duet with Dylan on this record seem well suited to their tasks and turn in consistently strong performances.

The Byrds predominate on the terrific set list, which includes four tracks associated with that band: Pete Seeger and Idris Davis’s “The Bells of Rhymney” and Gerry Goffin and Carole King’s “Goin’ Back,” both with Beck sharing vocals; Roger McGuinn and Harvey Gerst’s “It Won’t Be Wrong,” which features Fiona Apple; and David Crosby’s “What’s Happening.” The Byrds are also indirectly represented by “You Showed Me” (with Cat Power), a hit for the Turtles that Gene Clark and Roger McGuinn composed. Here, too, is Arthur Lee’s “No Matter What You Do” (with Regina Spektor), from the essential—and rather Byrds-like—eponymous debut album by Love.

Spektor also shares vocals with Dylan on Neil Young’s “Expecting to Fly,” a high point for Buffalo Springfield; and Eric Clapton plays guitar on the same group’s “Questions,” a Stephen Stills tune. In addition, the CD offers two Brian Wilson/Beach Boys gems: “In My Room,” with Fiona Apple, and Pet Sounds’ “I Just Wasn’t Made for These Times,” with Young on guitar.

The Laurel Canyon scene produced wonderful pure pop as well as folk rock, and this album embraces it. In addition to the aforementioned Turtles number, the program includes Tommy Boyce and Bobby Hart’s “She,” the Monkees song (with Josh Homme of Queens of the Stone Age); the Association’s “Never My Love” (with Norah Jones); and John Phillips’s “Go Where You Wanna Go,” the Mamas and Papas tune (with Jade Castrinos).

The album serves as a reminder that as Jakob Dylan has said, “the best test of songwriting is that it transcends its moment in time” and that these songs “are as powerful today as they were” when they first appeared. The affectionate cover versions on Echo in the Canyon will make you want to listen again to the originals, but they shine plenty bright on their own.

The Claudettes, High Times in the Dark

The Claudettes—who once covered both “Our Day Will Come” (the 1963 Ruby and the Romantics pop hit) and Pink Floyd’s “Us and Them” on the same record—call their music “garage cabaret,” and that’s as good a description as any. Their challenging, exhilarating sound profits substantially from the piano work and adventurous compositions of Brian Berkowitz (who bills himself as Johnny Iguana). But their biggest asset is singer Berit Ulset, whose captivating vocals variously recall artists as diverse as Julie London, the aforementioned Ruby, and Blondie’s Deborah Harry. This inventive fifth album, which finds her singing largely about love, lust, and heartbreak, is arguably their best.

This heartfelt latest album from attorney-turned-musician David Childers credits Ramseur Records label head Dolplus Ramseur as producer, but that job ostensibly consisted largely just of supplying his living room. That’s where Childers and his band recorded these tracks directly to tape in 2018 and 2019. The resulting CD exudes the homespun feel and spontaneity you’d expect from a setting like that. Childers is an engaging singer and guitarist whose love of language comes through in every song. Reference points include James Talley, Guy Clark, Jerry Jeff Walker, and Billy Joe Shaver.

This fine second album derives its name partly from L.A.’s Cinema Bar where—every Monday night for nearly a decade—Hot Club of Los Angeles has been paying homage to the gypsy jazz genre that master guitarist Django Reinhardt popularized in the 1930s. The CD includes Reinhardt’s own “Douce Ambience” and “Nuages” (the latter sung in French) and more classic gypsy jazz. Also here are several lively band originals in the same style, among them the title track, a nod to Reinhardt’s best-known number, “Minor Swing.” The quintet incorporates two capable vocalists and, in addition to guitar, drums, and piano, features accordion, banjo, and upright bass, all masterfully played.