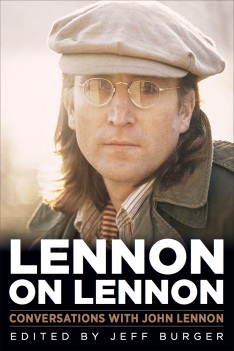 John Lennon was a highly opinionated and controversial figure with a commanding personality and quick wit. He spoke candidly about his intense, sometimes tumultuous relationship with Yoko Ono, his split with the Beatles, his squabbles with Paul McCartney, and just about everything else, baring his emotional ups and downs for all to see. By the time he granted his—and this book’s—final interview, only hours before his death, he had become one of the most famous people on the planet.

Lennon on Lennon: Conversations with John Lennon is an authoritative anthology of some of his most illuminating conversations. The majority have not been previously available in print, and several of the most important—comprising more than a third of this volume—have not been widely available in any format. This material paints a revealing picture of the artist in his own words and offers a window into the cultural atmosphere of the sixties and seventies.

The book is published in hardcover in North America by Chicago Review Press and has been republished in England, Ireland, Australia, New Zealand, and Japan. Coming soon: a Spanish edition from Editores Argentinos. Click here for worldwide purchase links.