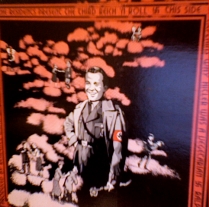 Only weeks after I termed Wildman Fischer’s new release “the weirdest record I’ve ever heard,” I have stumbled upon no fewer than three new contenders for the throne. All of them come from the Residents, the only act on the obscure Ralph Records.

The outfit’s first and fourth LPs, Meet the Residents and Fingerprince, prove almost as dispensable as they are clever and unique. Containing headache-inducing, frequently discordant originals, they sound like what Edgard Varese and Frank Zappa might collectively produce after they had frontal lobotomies. Even less accessible is the group’s second album, Not Available, mainly because it is and always has been just that.

Third Reich N Roll, however, cannot be so easily dismissed. Treating 60s pop hits as if they were avant garde, the act attacks allegedly fascist rock culture while affectionately massacring such familiar tunes as “Hey Jude,” “96 Tears” and “It’s My Party.” You could get a headache from this disc, too, but if you have strong memories of 60s music as well as a sardonic sense of humor, you may die laughing first.