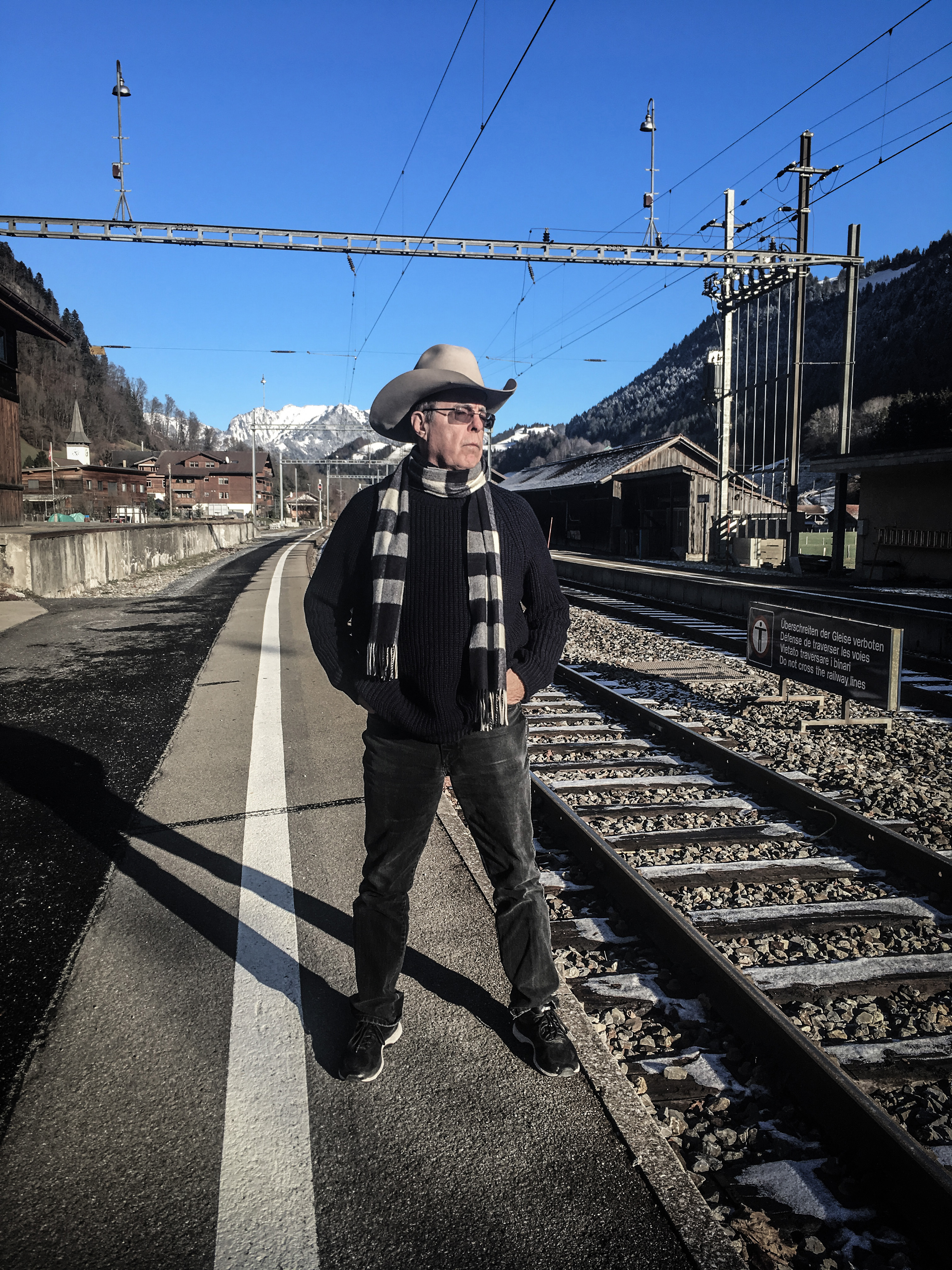 I have been singing Tom Russell’s praises since 1977 when he sent me Ring of Bone, the excellent album he’d recorded with his then musical partner, Patricia Hardin. Nearly half a century and dozens of albums later, I continue to maintain that he’s a national treasure; and I remain baffled by the fact that he’s not as well known as such other folk masters as Leonard Cohen and John Prine.

These days, I’m not the only one who praises Russell to the hilt. In Rolling Stone, for example, John Swenson has called him “the greatest living folk-country songwriter.” Poet Lawrence Ferlinghetti has said he’s “Johnny Cash, Jim Harrison, and Charles Bukowski rolled into one.” David Letterman, meanwhile, once joked, “Isn’t he the best? I’d like to quit my job and travel with him…if the money can be worked out.”

Russell’s songs are rich and adventurous, his well-honed lyrics limn quirky and memorable characters, and his world-weary vocals are as emotion-soaked as any in folk. Plus, he keeps getting better, taking on one ambitious project after another, such as 2013’s stunning Aztec Jazz, which he recorded with the Norwegian Wind Ensemble, and 2015’s The Rose of Roscrae, a western folk opera, complete with a libretto. 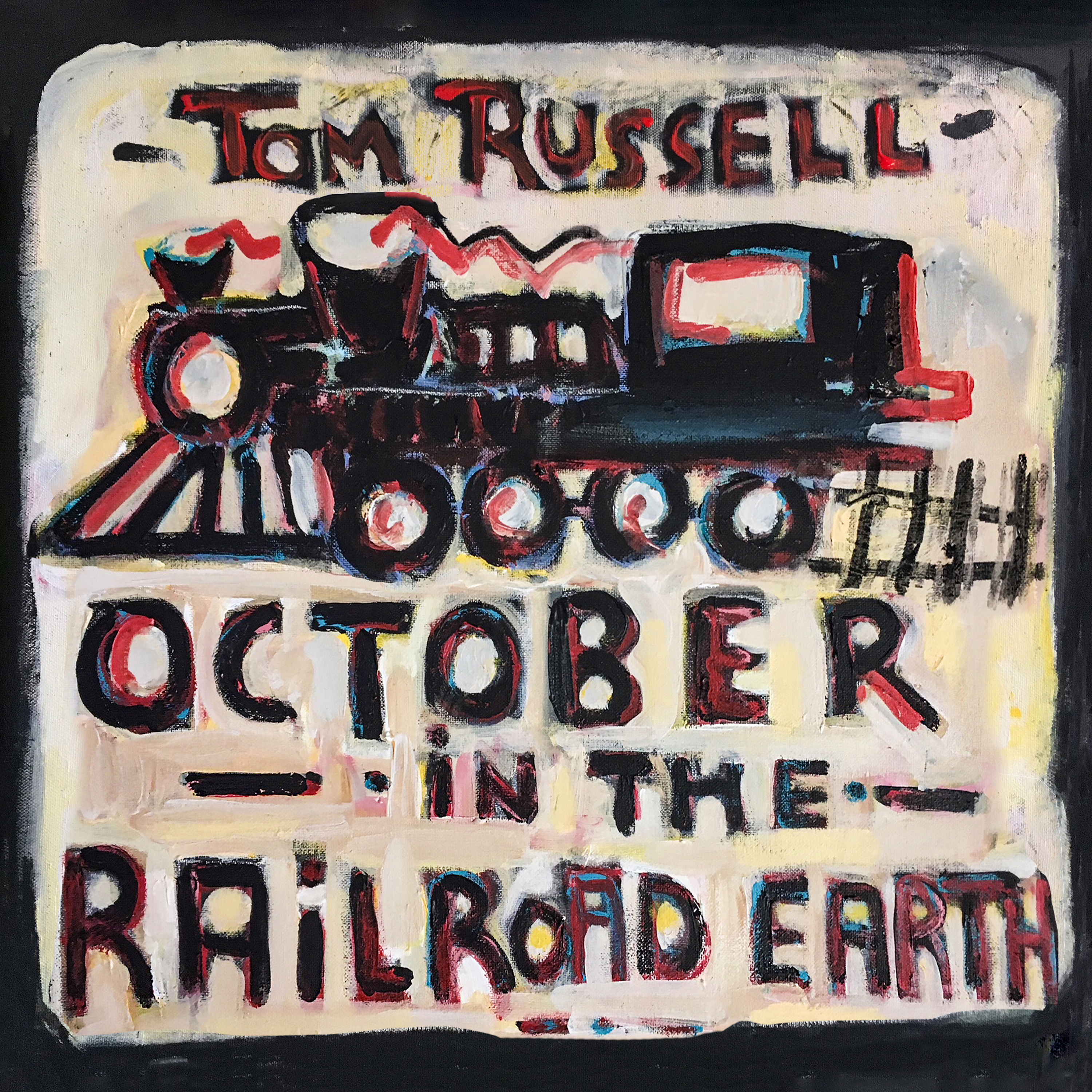 Just about every time Russell releases an album, I say it might be his best, and I’m prepared to say that again regarding the new October in the Railroad Earth, whose music and lyrics he well describes as “Jack Kerouac meets Johnny Cash in Bakersfield [California, home of the sound associated with artists like Merle Haggard and Buck Owens].” All those influences become evident in the course of the record, which features electric guitar by Commander Cody alumnus Bill Kirchen and vocal support on two numbers by folksinger Eliza Gilkyson.

If the songs on the album ring true, that’s because they are: every last one of them was spun from real life. In fact, some of the tales were inspired by experiences Russell himself has had (and if you’ve read about his background—which has included everything from earning a degree in criminology to teaching in Africa during a civil war—you know he’s had plenty).

The hard-rocking “Hand-Raised Wolverines,” for example, uses Russell’s encounter with semi-tame wolverines as a metaphor for modern life while “Highway 46” finds him recalling where he was and what he did when Merle Haggard died. The poignant “T-Bone Steak and Spanish Wine,” one of the album’s best tracks, describes his return visit to a restaurant and bar where he played three sets a night 40 years earlier. The darkly funny “Pass Me the Gun, Billy,” also apparently true, tells of a time when the singer and his cowboy brother Pat risked their lives to go after a dangerous bunch who were shooting at Pat’s cows. “When the Road Gets Rough,” which evokes Russell’s life on tour, was inspired by a comment from his wife Nadine (who gets a co-writing credit and a mention in this song as well as a mention in “Wolverines”). And then there’s “Small Engine Repair,” about a man who fixed Russell’s lawnmower, which proves a good writer can make poetry out of almost anything.

Not all of these true tales issue directly from personal experience. The album’s title track, which takes its name from a Jack Kerouac prose poem, offers a farewell to the On the Road author. “Isadore Gonzalez” is an accordion-spiced account of a Mexican cowboy who died in a horse accident while appearing in Buffalo Bill’s Wild West Show in the 1880s; and “Red Oak Texas” paints a picture of twin boys who became war heroes in the Middle East but came home with broken spirits.

“Back Streets of Love,” meanwhile, finds Russell being guided on an interstate by a voice from a telephone who’s “taking orders from a satellite above” and demanding that he “proceed to the route.” The album’s only non-original is the traditional “Wreck of the Old 97,” yet another true tale, which he introduces by saying he first heard it on Johnny Cash’s debut Sun Records release.

Like the vast majority of Russell’s earlier work, this is four-star material, from start to finish. Don’t miss it.

The High Strung, Quiet Riots. The melodies and harmonies are strong throughout the latest release from the High Strung, whose prime movers include guitarist/vocalist Josh Malerman, writer of the thriller novel Bird Box (now a popular Netflix film). The power-pop group, who have released well over a dozen albums since they formed in Detroit in 2000, evokes 1960s bands on Quiet Riots, which mixes in elements of garage rock, pop, and psychedelia. The album (available on vinyl and for download) includes “Goffin & King,” a nod to songwriters Gerry Goffin and Carole King, as well as numbers with whimsical titles like “Death to Us Is a Mixture of Moods” and “Darling Weirdo.” The upbeat songs, most of which clock in at less than three minutes, are loaded with ringing guitars and addictive hooks. Occasionally, they flirt enough with bubblegum to make me think of them as a guilty pleasure. Guilty or not, though, they’re all a pleasure.

Colin Linden & Luther Dickinson with the Tennessee Valentines, Amour. The guitar work often sounds reminiscent of Ry Cooder and the laid-back pacing recalls Cowboy Junkies’ Trinity Session on this excellent collection of classic songs about love, which arrives just in time for Valentine’s Day. Highlights include the traditional “Careless Love,” which shows up in instrumental and vocal versions; “What Am I Living For”; Kris Kristofferson’s “For the Good Times”; “Crazy Arms,” the Ray Price hit; and an otherworldly “Forgot to Remember to Forget,” which sounds nothing like the popular Elvis Presley version. The guitar work by Colin Linden and Luther Dickinson (Black Crowes, Mississippi Allstars) is imaginative and skillful, as are the violin and accordion contributions from the always-wonderful Fats Kaplin. Also uniformly first-rate are the vocalists that Linden and Dickenson rounded up for this project, among them Billy Swan, who delivers his own “Lover Please,” a 1962 hit for Clyde McPhatter.

Eric Brace, Peter Cooper, & Thomm Jutz, Riverland. Though Eric Brace hails from Washington, D.C., Peter Cooper comes from South Carolina, and Thomm Jutz was raised in Germany, they manage to do an excellent job of conjuring up Mississippi on this lilting folk music concept album. Its famous river plays a role in several of the songs, including “River City,” “King of the Keelboat Men,” “In the Presence of the River,” “To Be a Steamboat Man,” “Down Along the River” (about Grant shelling Vicksburg during the Civil War), and “Drowned and Washed Away” (about flooding along the river that devastated sharecroppers in 1927). But it’s not all water-related: “Tom T. and Brother Will” concerns the friendship between singer Tom T. Hall and an idiosyncratic preacher named Will Campbell; and that song is followed by Campbell and Cooper’s “Mississippi Magic,” a meditation on the dark times the state endured during the civil rights struggles of the 60s. There are also solid numbers about William Faulkner (“As Far as I Can See”) and Jerry Lee Lewis (“Uneasy Does It”).