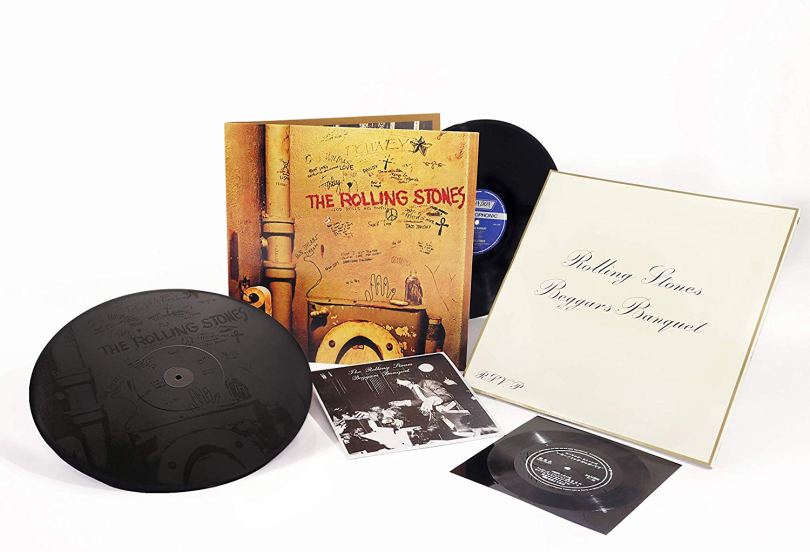 In 1967, Their Satanic Majesties Request found the Rolling Stones reacting to albums like the Beatles’ Sgt. Pepper with studio-enhanced psychedelia. A year later, they followed up with Beggars Banquet, which saw them moving in an opposite direction: like such artists as Bob Dylan, who had recently delivered the stripped-down John Wesley Harding, they went back to basics for an album that relied largely on acoustic blues. No longer “In Another Land” and “2000 Light Years from Home,” they had come down from space and were now drinking to the “Salt of the Earth” and waiting for a “Factory Girl.” This was their initial collaboration with American producer Jimmy Miller, who had recently overseen the first two Traffic albums, and you can hear his influence.

The LP—which incorporates Nicky Hopkins’s piano on seven tracks as well as some of Brian Jones’s last major contributions to the band—still sounds terrific. The conga-driven “Sympathy for the Devil” opens the proceedings on a high note, and the set also includes “Street Fighting Man,” a fine rocker that addresses political violence with as much ambivalence as the Beatles’ contemporaneous “Revolution.” Also memorable are the folky “Factory Girl,” which sounds a bit like a companion to the earlier “Back Street Girl”; slide-guitar-and-vocal gems like the country-flavored “No Expectations” and “Jigsaw Puzzle”; the raunchy “Stray Cat Blues”; and a terrific reading of Rev. Robert Wilkins’s “Prodigal Son,” the only non-original. A few songs are arguably better than others but there’s not a rotten apple in the bunch.

Two new editions of the album mark its 50th anniversary. Both feature an excellent remaster of the original recording; a mono version of “Sympathy for the Devil”; a Flexi-disc containing a 1968 phone interview with Mick Jagger; and the image of a graffiti-filled toilet seat that the record company rejected for the LP’s cover 50 years ago. The difference is that one edition presents the album and mono single on vinyl and includes a promo code for download of a digital copy, albeit one that consists of lossy MP3s, not CD-quality WAV files. The other delivers the album and single on Super Audio CDs (SACDs), which are backward compatible with standard CD players.

The bad news is that perhaps because of contractual restrictions, neither package offers any demo versions, outtakes, surround-sound mixes, or video bonuses. Also, neither contains any liner notes. Those are notable shortcomings in a 50th anniversary reissue of an album as significant as Beggars Banquet. Still, anyone who doesn’t already own this music—or who has worn out a copy or two—would be well advised to pick up one of these editions. 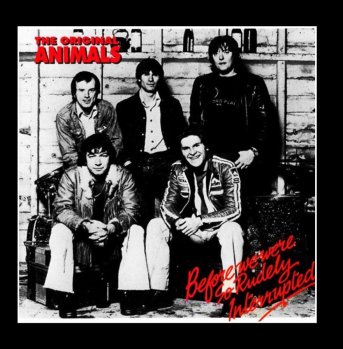 The Animals, Before We Were So Rudely Interrupted. The Animals’ membership changed over the years, but all its big mid-sixties hits, such as “House of the Rising Sun” and “We Gotta Get Out of This Place,” issued from the original lineup: vocalist Eric Burdon, keyboardist Alan Price, guitarist Hilton Valentine, bassist Chas Chandler, and drummer John Steel. This newly reissued 1977 album, which reunites those five, is arguably less commercial-sounding than some of the earlier stuff and, in fact, did not sell well. But Animals fans should check it out. Burdon and company are in fine form on bluesy covers of songs like Percy Mayfield’s “Please Send Me Someone to Love,” Doc Pomus’s “Lonely Avenue,” and Bob Dylan’s “It’s All Over Now, Baby Blue.” And there’s at least one five-star performance here: a reading of Jimmy Cliff’s “Many Rivers to Cross,” on which Burdon’s powerful vocal and Price’s organ conjure up the magic of the Animals’ early hits.

Shawn Mullins, Soul’s Core Revival. Twenty years ago, Shawn Mullins’s career got off to a flying start with a No. 1 single called “Lullaby.” The song appeared on Soul’s Core, his first major-label LP, alongside 11 more originals and Kris Kristofferson’s “Sunday Mornin’ Comin’ Down.” Mullins—an excellent singer whose baritone sounds like a soul-inflected variation on Steve Goodman’s voice—revisits that album’s contents on this release, which includes fresh band versions of Soul’s Core’s numbers, plus a bonus disc with acoustic performances of the same tunes, each with a spoken introduction by Mullins. His story songs, written mostly in the first person, are well-told, and the music, which draws on rock, folk, and pop, is consistently catchy and melodious.

Dreaming of Dylan: 115 Dreams about Bob, edited by Mary Lee Kortes. “I’ll let you be in my dreams if I can be in yours,” Bob Dylan sang in 1963’s “Talkin’ World War III Blues.” That invitation apparently provided the inspiration for this attractively designed book, which collects descriptions of 115 people’s dreams that feature Dylan in one way or another. It’s a clever idea, and it underscores the fact that Bob and his music are on a lot of listeners’ minds. Because these aren’t Dylan’s dreams, though, they shed zero light on him. Another problem: dreams can be difficult to interpret, even if you know the dreamer, and we don’t know—not to mention care about—the vast majority of these people (though you’ll recognize a few names, such as Patti Smith and perhaps Sirius XM DJ Meg Griffin and guitarist Kevin Odegard, who plays on Dylan’s “Tangled Up in Blue”). Yet another problem: like many remembered dreams, some of these are extremely sketchy, and Dylan barely even figures in some of them, such as the one where the only connection to the singer is that it incorporates the drumbeat from one of his songs, the one where the dreamer deems his music annoying, and the one in which Dylan is found to be simply sitting on a bench. Granted, some of these tales will make you smile, but I suspect most of them will leave you thinking, “Who cares?” Answer: maybe only the dreamer.