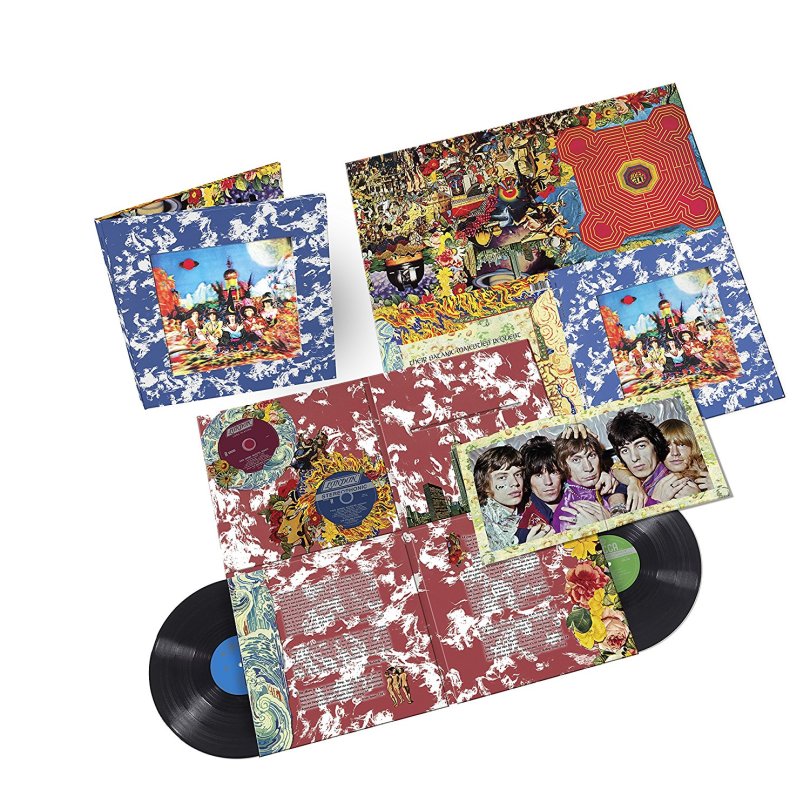 The Rolling Stones’ Their Satanic Majesties Request garnered less than universal acclaim when it first appeared in December of 1967. The group, said some, had taken up residence in the shadow of the Beatles’ then six-month-old Sgt. Pepper’s Lonely Hearts Club Band. They had, said these critics, abandoned their R&B roots, jumped on a psychedelic bandwagon, and served up a trendy mishmash in the midst of a chaotic period for the members.

There were grains of truth—and in some cases, more than grains—in all of these charges. No, this wasn’t R&B; and yes, the Stones seemed to be heading down the psychedelic road that the Beatles and others had already traveled. They had even hired Michael Cooper, who’d designed the famous Sgt. Pepper’s cover, to create a jacket image for Satanic Majesties. (Look for the Fab Four’s faces hidden in the flowers.)  The album is as awash with lyrics about drugs and space travel as many other period LPs, and some of the lines today seem silly, incomprehensible, or both.

Moreover, the sessions for this record were a bit of a mess. Manager/producer Andrew Long Oldham quit halfway through the project (making this the band’s first self-produced LP). And while the studio reportedly contained lots of psychedelics, it rarely housed all five Stones at once. As Keith Richards acknowledged in his 2010 autobiography, Life: “We struggled haphazardly to make Their Satanic Majesties Request. None of us wanted to make it, but it was time for another Stones album.”

It was also time for some challenges outside the studio. Richards, Mick Jagger, and Brian Jones were all arrested on drug charges around the period when they created this record. Meanwhile, Jones developed pneumonia and broke up with his girlfriend, who had taken up with Richards.

The record sets a druggy tone from the get-go by opening with the sounds of coughing and laughing and a spoken “Where’s that joint?”

But in the end, none of this really mattered because, somehow, the Satanic Majesties sessions resulted in one of the most enjoyable and accessible records in the Stones’ entire catalog—and also one of the most underrated. The richly layered music—which employs a wide array of percussive devices plus such unusual instruments as the theremin, sitar, electric dulcimer, and mellotron—holds up beautifully.

And not only is it eminently listenable; it played a key role in helping the Stones move beyond their early R&B phase to become the less narrowly defined outfit that would later deliver music as diverse as “Moonlight Mile,” “Miss You,” and “Wild Horses.”

The record—which was originally to be called Cosmic Christmas—sets a druggy tone from the get-go by opening with the sounds of coughing and laughing and a spoken “Where’s that joint?” Then comes the infectious “Sing This All Together,” a rhythmic, sing-along with Jones on sax that returns in an expanded, largely improvisational eight-minute version at the end of side one (remember sides?). In between are the spacey “Citadel” and “In Another Land,” the latter the only Stones song written and sung by Bill Wyman (whose studio-enhanced voice has a tremolo effect here); and “2000 Man,” which recounts the singer’s “affair with a random computer” (a futuristic theme echoed nearly half a century later by Spike Jonze’s 2013 film Her).

Side two is arguably even better. It opens with what sounds like a carnival barker, followed by the poppy “She’s a Rainbow,” which includes wonderful Nicky Hopkins piano and an exquisite string arrangement by John Paul Jones, who would reappear the following year in a little band called Led Zeppelin. Then comes the dark, moody “The Lantern”; the fascinating, largely instrumental “Gomper”; and the ethereal, propulsive ”2000 Light Years from Home.” Finally, ostensibly just to throw everyone off, the Stones return from outer space to deliver the tongue-in cheek “On with the Show,” which takes us to a cheesy strip club where an M.C. promises, “Your wife will never know that you’re not really working late…your hostess here is Wendy, you’ll find her very friendly.”

An individually numbered 50th anniversary special edition of Their Satanic Majesties Request, out this month, gives listeners who haven’t already discovered the album another chance to do so; and it provides long-time fans of the record an opportunity for a significant upgrade. Included in the beautifully designed package are two CDs, containing newly remastered stereo and mono versions of the album, as well as two 180-gram vinyl LPs with the same content. You can listen to the CDs via any standard player but they offer enhanced sound when played on equipment designed to handle Super Audio Compact Discs (SACDs). The package incorporates the original 3D cover art, which was eliminated after early pressings due to its cost, as well as a 20-page booklet that includes a long, incisive new essay by Canadian music writer Rob Bowman.

I do have several quibbles. First, since relatively few people own players that can take advantage of SACD, I wish the Stones’ label had instead offered enhanced (preferably 5.1 surround) sound on Blu-rays. Also, while Stones fanatics and vinyl lovers will appreciate the mono mixes and LPs, I suspect many listeners would like the option to buy just the remastered stereo CD at a much lower price. (Perhaps we’ll see that offering at a later date.) Another configuration I think some would have welcomed: instead of giving us four versions of the same 10 tracks, why not supplement the original album with studio outtakes (assuming they exist); live versions of “She’s a Rainbow” and “2000 Light Years from Home” (the only songs from the album that the group has performed in concert); and remasters of “Dandelion” and “Child of the Moon,” the terrific non-LP single that resulted from the same period?

All that said, this remains an immersive and memorable record that belongs in any collection of essential rock. And it has never sounded better than it does in this lavishly packaged reissue.