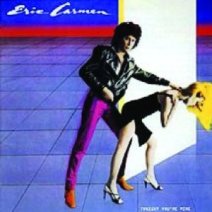 Though Eric Carmen’s Raspberries and first solo LP delighted me, I wrote him off a year or two ago on the basis of his enervated more recent albums. When this latest set arrived, I did halfheartedly track a few tunes out of a sense of duty; but I barely listened and quickly stashed the record in a reject pile. I’m glad I didn’t leave it there, because subsequent spins made it clear that Carmen has bounced back—and then some. The predominant Phil Spector-oriented rockers here explode with at least as much energy—and conviction—as the Raspberries ever projected. And while a trend toward ballads signalled Carmen’s decline, the soaring, well-sung ones here boast just as much excitement as the rockers. If you ever liked this guy, now’s the time to give him another chance.