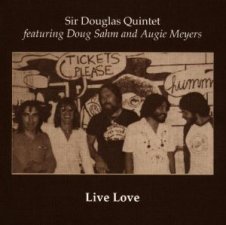 Recorded early last year at Austin’s Armadillo World Headquarters, the delightful, albeit poorly mixed Live Love reunites the Sir Douglas Quintet, which first achieved fame with 1965’s “She’s About a Mover.” That song isn’t on the bill here, but the concert LP does include the similarly styled “Dynamite Woman,” a warm, bluesy “Driving Wheel,” a country/blues version of “My Girl,” and a lot more.

Confronted by such songs, which collectively fuse everything from Tex-Mex, rockabilly, and blues to country and rock, one reviewer summed up: “It’s the equivalent of taking a West Side tamale, stuffing it with East Side barbecue and then chicken frying the whole affair to give it a country flavor.” Aside from noting that the result tastes just fine, I can’t add anything to that.