Like such artists as the Bee Gees and Fleetwood Mac, the Animals had more than one distinct incarnation. As part of the first wave of the British Invasion between 1964 and 1966, they produced 11 deservedly acclaimed U.S. hit singles, including such bluesy rock staples as “It’s My Life,” “We Gotta Get Out of This Place,” and the chart-topping “House of the Rising Sun.” Then, with a lineup that featured three brand-new members along with original lead singer Eric Burdon and the recently added drummer Barry Jenkins, they began eschewing their old hits in live performance and showcasing a dramatically altered approach. Like the Beatles and others around this time, they started offering psychedelicized music that incorporated Eastern and drug influences and, occasionally, political protest.

This version of the Animals, which lasted only from late 1966 to 1968, is the one spotlighted on a five-CD set called When I Was Young: The MGM Recordings 1967–1968. The anthology features remixed, remastered versions of the four LPs the group released over 15 months during this period, three of which were produced by Tom Wilson (Bob Dylan, Simon & Garfunkel). Also here are a smattering of bonus tracks and a 64-page booklet that includes album credits, reminiscences from former band members (though not Burdon), period photos, a listing of the group’s live performances, and cover art and labels from singles issued worldwide. It’s a mixed bag but one that’s well worth digging into.

First up is Winds of Change, the revamped group’s October 1967 debut release, which is presented on two discs, one in stereo and with five bonus tracks, the other in a rather different mono mix. The program includes “San Franciscan Nights,” a top 10 hit that the group performed at the Monterey Pop festival; a cover of the Stones’ “Paint It, Black”; “Yes, I Am Experienced,” a response to Jimi Hendrix’s “Are You Experienced?”; and the sitar-spiced title cut (which has been covered by the Ramones and others). Among the bonus tracks are “When I Was Young,” which cops an idea from Bob Dylan’s “My Back Pages”; and its flip side, “A Girl Named Sandoz,” Sandoz being the name of the laboratory where LSD was first synthesized.

Some of the music now seems pretentious, and the lyrics—which sound like the work of writers trying hard to seem up to date—now largely seem dated. It doesn’t help that Burdon uses several numbers, including “Poem by the Sea,” “The Black Plague,” and the rather awful “Man—Woman,” as vehicles for spoken recitations. His lead vocals are strong on some of the other tracks, though; and if you lived through this era, numbers like “San Franciscan Nights” can induce a pleasant wave of nostalgia. 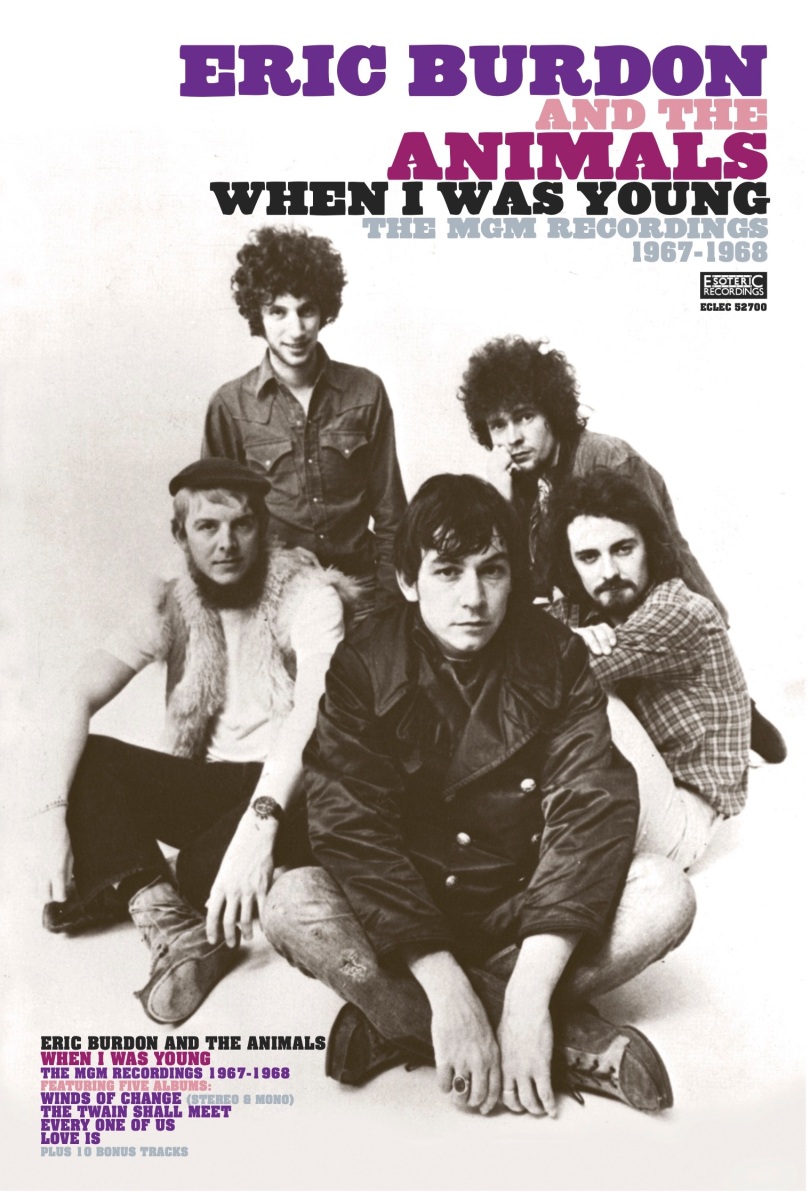 The Twain Shall Meet—which came out in May 1968, shortly after the band relocated from England to California—holds up much better musically and lyrically. “Monterey,” a tribute to the festival where the Animals performed the previous year, is as topical—and at times as anachronistic—as “San Franciscan Nights.” But its energy is undeniable and its loving evocations of performers like Jimi Hendrix, the Byrds, and Jefferson Airplane, give it an endearing quality. Also likable is “Sky Pilot,” a nearly eight-minute antiwar song that includes a long instrumental break, the sounds of war, and everything from strings to bagpipes (the latter courtesy of the Royal Scots Guards).

Even better are the moody “Orange and Red Beams” and “Just the Thought,” though it probably helps to have taken LSD to appreciate the lyrics. (“There’s a staircase in my living room and it leads to nowhere land,” goes the latter number. “There are flowers growing from my wall…They are flowers that only I can touch / I must turn my back before I rush.”) The bonus tracks here don’t add much: they include the mono single edit of “Monterey,” a top 20 hit that skips the album cut’s brief spoken intro; and the single version of “Sky Pilot,” which simply splits the song down the middle so that half could appear on each side of a 45 rpm disc. (The A side made the top 20.)

While the group may have been having short on concepts for new songs, they still evidence creativity here.

Every One of Us, an August 1968 release, is the most forgettable CD in the set, with songs like “Year of the Guru,” “White Houses,” and “Serenade to a Sweet Lady” sounding like filler from a group that has run out of ideas. The nadir is the 19-minute “New York 1963–America 1968,” which opens with about six minutes of an amiable ballad but then abruptly transitions to a music-free dialogue before closing with a lengthy jam that should have been left on the cutting-room floor. The only bonus cut is a stereo single version of “White Houses.”

The last album from this lineup—a December 1968 two-LP (now one-CD) collection called Love Is, devotes less than five of its 67 minutes to original material: Burdon’s slight but catchy “I’m Dying, Or Am I?” But while the group may have been short on concepts for new songs, they still evidence creativity: the rest of the program consists of frequently imaginative covers.

“River Deep, Mountain High,” the Phil Spector/Jeff Barry/Ellie Greenwich classic, is here, as are Johnny Cash’s “Ring of Fire”; the Bee Gees’ “To Love Somebody”; Sly Stewart’s appropriately titled “I’m an Animal”; and Traffic’s “Coloured Rain.” (The latter features a long solo by guitarist Andy Summers, who served briefly in the Animals before going on to fame with the Police.) But the album’s centerpiece is the more than 17-minute “Gemini/The Madman (Running Through the Fields),” which fills a whole side of the original vinyl double LP. The composition—which originated with Dantalian’s Chariot, Summers’s short-lived psychedelic previous group—has its affected moments to be sure, but it packs a punch: the music is rhythmic, energetic, and for the most part, highly listenable.

Clearly, this box is a hit-and-miss affair. But scattered throughout are many moments when the group’s adventurousness pays dividends. And even when the music falls short, it’s worth hearing Burdon, one of the most noteworthy vocalists of 1960s rock.

For a long time, it has seemed as if 2004’s Harmony might be the last studio album from Gordon Lightfoot, the great Canadian folk singer/songwriter. But 16 years later, he’s back with Solo, a self-produced CD containing new recordings of 10 recently unearthed songs. Lightfoot wrote and first recorded all of them in late 2001 and early 2002, shortly before he endured a near-fatal aneurysm, but he didn’t release them at the time.

As the title suggests, Solo features just the singer and his guitar. (“I thought my fans would be interested in hearing what songs sound like when first written,” he says.) Without his longtime sidemen, the album occasionally seems a bit like a demo tape; most of the time, however, the guitar work and vocals are more than enough to carry the day, even if the latter are somewhat less imposing than they were in his heyday. The lyrics are redolent of vintage Lightfoot—romantic, contemplative, wistful—although this is clearly the voice of an older man looking back on life.

The plodding “Just a Little Bit”—which finds the singer asking whether you “ever get tired” of everything from “mowin’ the lawn” to “the clothes you wear” to “the old routine”—strikes me as the only misstep. (By the time he gets to the line that goes, “Do you ever get tired o’ me singin’ this song?” I’m ready to answer “yes.”) That track aside, though, Solo is another fine entry in one of the finest folk catalogs of the last half century.