Music Reviews: New Reasons to Book a Stay at the Eagles’ ‘Hotel California,’ plus Uncle Walt’s Band, the Claudettes, and More 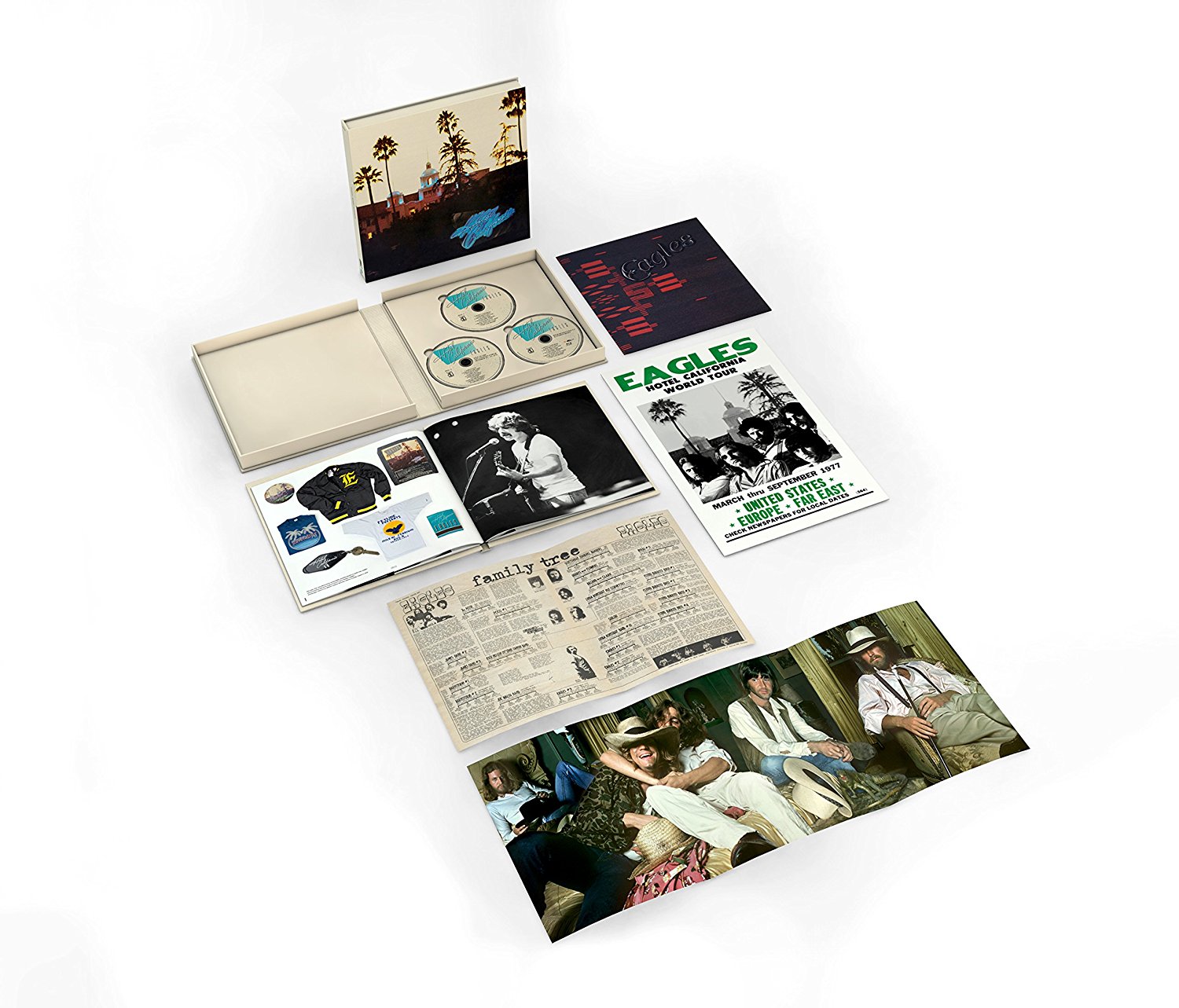 Upwards of 32 million people have already checked into the Eagles’ Hotel California, a country-rock landmark that first charted during Christmas week in 1976 and spent two months in the No. 1 slot. The group’s third chart-topper (following One of These Nights and Their Greatest Hits), it stayed in the Top 200 for two full years. Two of its nine selections—the title track and “New Kid in Town”—also hit No. 1; a third, “Life in the Fast Lane,” made it to No. 11, and several of the other tracks, such as “Wasted Time,” became well-known concert staples.

Forty years later, several reissues of Hotel California offer a fresh look at this release. You can buy a remastered version of the original album; or a package that couples that with a second CD with 10 tracks from gigs at the Forum in L.A. in October 1976, two months before the album’s release. Throw in some more dollars and you can get a deluxe edition that also offers a Blu-ray audio disc with HD-PCM stereo and 5.1 surround mixes of Hotel California; a 44-page hardcover book with photos and notes; a 20-page tour pamphlet; and three Eagles posters. I could have done without the pamphlet, posters, and book; and I’m a little disappointed that the deluxe edition doesn’t incorporate any videos, demos, or 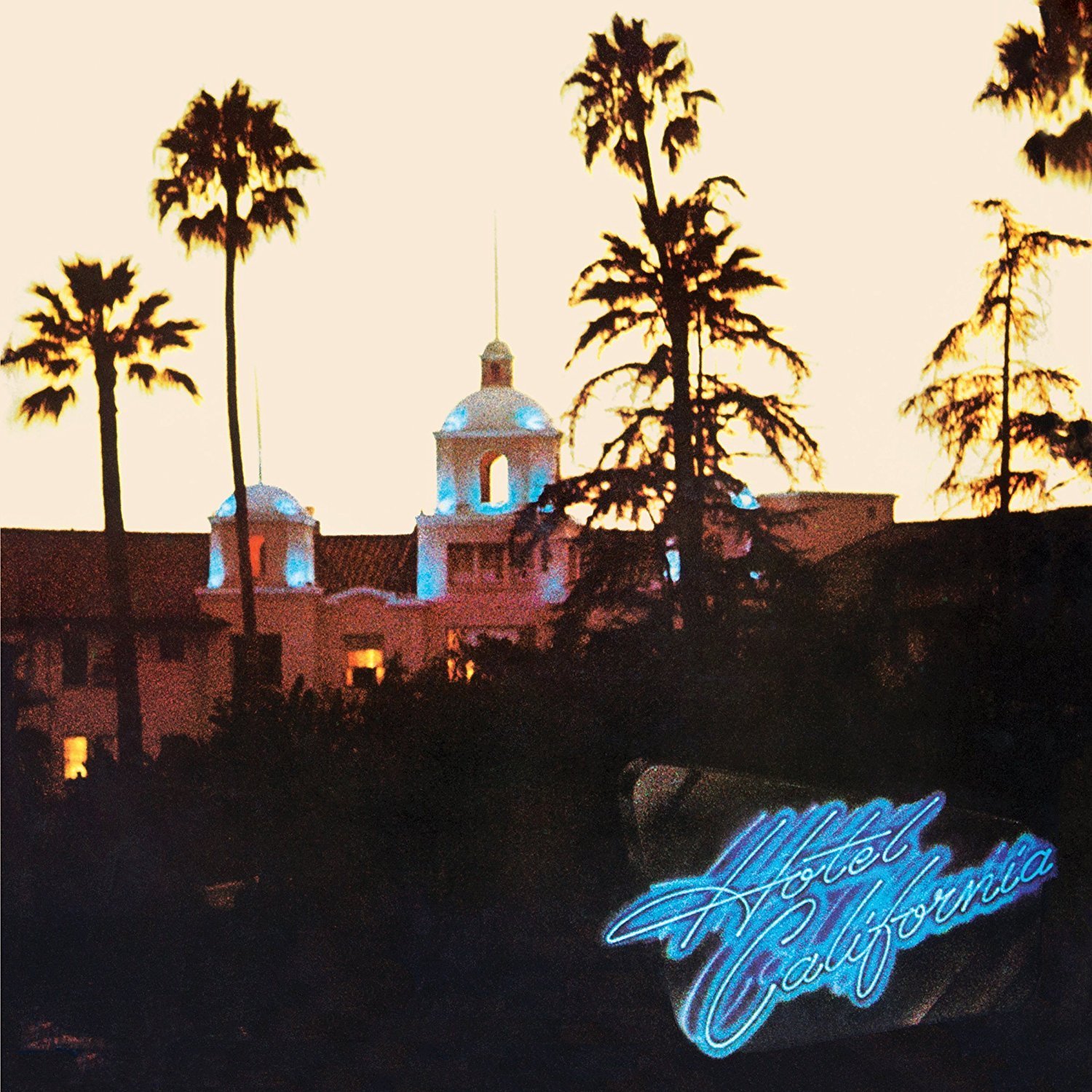 alternate versions. But much of what it does feature—especially the Blu-ray audio disc and the concert material—adds significantly to the original release.

The Blu-ray’s surround sound injects new punch into Hotel California, which still seems like a high point of the country-rock movement that the Eagles played a big role in starting. “New Kid in Town,” in particular, stands as one of the best songs the group ever produced. Its harmony vocals are terrific and so is its lyric, which the group’s Don Henley (its coauthor along with J.D. Souther and bandmate Glenn Frey) has said is “about the fleeting, fickle nature of love and romance” as well as the “fleeting nature of fame.” Then there’s the iconic title track, which boasts a great electric guitar coda by Don Felder and Joe Walsh, not to mention a lyric that memorably describes a sort of Roach Motel for spiritually bankrupt West Coasters (“You can check in any time you like but you can never leave”). I’m less enamored of a few of the other tracks, such as “Life in the Fast Lane,” a rocker that shows off the influence of then new-member Joe Walsh; but there are other highlights, such as the ballads “Wasted Time” and “Try and Love Again.”

The 49-minute concert disc, while inexplicably much briefer than the shows that spawned it, samples some of the standouts from the group’s discography up to that point, mostly via previously unreleased versions. In addition to Hotel California’s title track and “New Kid in Town” (which had yet to be issued at the time of these performances), this CD includes “Take It Easy” and “Witchy Woman” from their eponymous debut; “Already Gone,” “James Dean,” and “Good Day in Hell” from On the Border; “Take It to the Limit” and the title track from One of These Nights; and “Funk #49,” from Joe Walsh’s former group, the James Gang.

I saw the Eagles live in 1976, and I still remember what an exciting and polished show they delivered; so I wasn’t surprised by the high quality of the live material here. If you’re a fan, those concert tracks plus the Blu-ray should be enough of a carrot to get you to upgrade.

Uncle Walt’s Band, Anthology: Those Boys from Carolina, They Sure Enough Could Sing… The acoustic Uncle Walt’s Band—a trio that launched in South Carolina, relocated to Austin, Texas, and enjoyed popularity there in the late 70s and early 80s—served up an inventive and varied musical brew that incorporated elements of jazz, folk, swing, jug bands, rock, and early 20th-century popular music. I even hear traces of the Ink Spots in a few numbers on this thoroughly enjoyable 21-track anthology, which includes five previously unavailable recordings plus ones that were first issued between 1974 and 1991. The trio’s material has been interpreted by such fans as Jerry Jeff Walker, Lyle Lovett, Shawn Colvin, Jesse Colter, B.J. Thomas, and Big Star’s Chris Bell, and the originals that dominate this program—which includes three live tracks—display the songwriting talent that has prompted all those covers. The performances, meanwhile, feature magical three-part harmonies that deliver on the boast in the album’s title.

Justin Hinds and the Dominoes, Travel with Love; Justin Hinds, Know Jah Better. Until these reissues came along, all I knew of Justin Hinds was his infectious first single, 1964’s “Carry Go Bring Come,” which was one of the biggest hits of the ska era and was included on Tougher Than Tough: The Story of Jamaican Music, an indispensable 1993 box set. Hinds, who died in 2005, was one of the island’s greatest artists—a major figure through the ska, rocksteady, and reggae eras. You can see why with reissues of 1992’s Know Jah Better and 1984’s Travel with Love, the latter performed with his terrific band the Dominoes (named for Fats Domino, an influence) and featuring 10 bonus tracks. Hinds—an elastic, smooth-as-silk vocalist—wrote all the songs on both albums, which are consistently as difficult to turn off as anything from the Wailers.

A Hawk and a Hacksaw, Forest Bathing. Don’t hold your breath waiting for this seventh album from the quirky American folk duo A Hawk and a Hacksaw to take the charts by storm; this isn’t exactly Fleetwood Mac. But that doesn’t mean it isn’t highly accessible to those who are open to taking side trips from the mainstream. Accordionist Jeremy Barnes and violinist Heather Trost’s mostly instrumental creations are steeped in Balkan, Turkish, and Eastern European styles. On this latest outing, the New Mexico-based duo and their guests employ everything from accordion, autoharp, guitar, and clarinet, to upright bass, tenor sax, violin, viola, mellotron, and dulcimer—plus a few instruments I’ve never heard of, such as tapan (a kind of drum) and riq (a type of tambourine). The results range from playful to mesmerizing.

The Claudettes, Dance Scandal at the Gymnasium! The third full-length album from this promising outfit mixes punk and a pop sensibility with a dollop of jazz, blues, and soul. On “November” lead singer Berit Ulseth sounds like the Sundays’ Harriet Wheeler. “Death and Traffic” and “Total Misfit,” meanwhile, recall early Blondie, and some of the discordant elements here suggest a Velvet Underground influence. At times, the sound seems a bit muddy and the group appears to still be finding its way, but this album suggests that the Claudettes are worth keeping an eye on.

Vivian Leva, Time Is Everything. Like labelmate Dori Freeman, Vivian Leva has an unaffected, pure voice and a sensibility that comes from being raised in Virginia by musician parents. On this winning debut, which features prominent pedal steel and fiddle, she features a few old songs—such as “Cold Mountains,” which she picked up from an Alan Lomax recording; but the bulk of the program consists of originals, mostly about loves won and lost. The album finds her backed by a talented crew and equally adept at everything from banjo-spiced Appalachian music to melancholy folk ballads to honky tonk. The fiddle-spiced “Why Don’t You Introduce Me as Your Darlin’,” a Leva original that fits the latter category, is a Kitty Wells-style standout.