Music Reviews: ‘Trouble No More’ Spotlights One of Bob Dylan’s Most Controversial Eras, plus Jeffrey Martin and Rusty Young 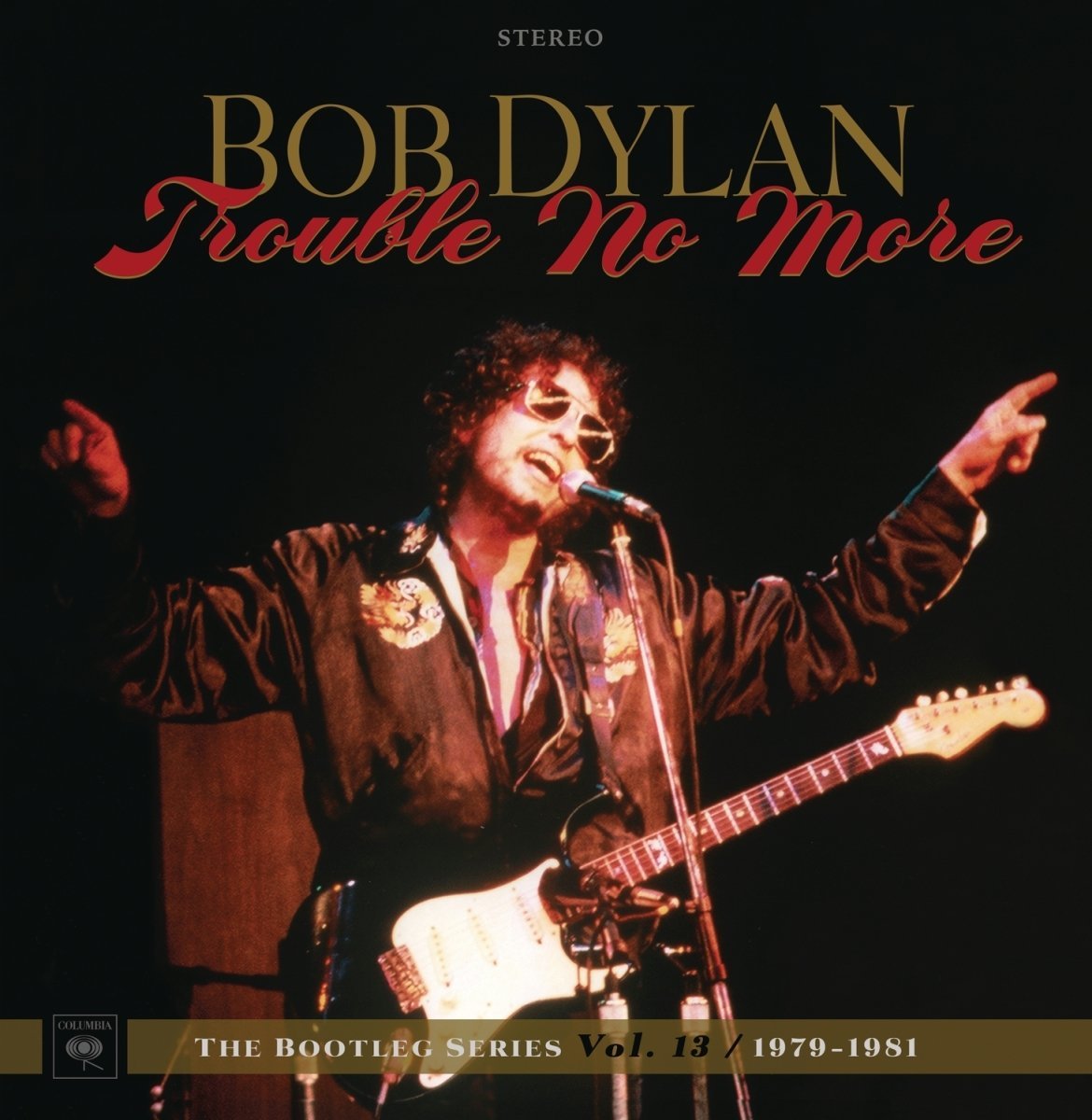 Even the most fanatical Bob Dylan fan would likely concede that the numerous high points of his career have been interspersed with a few notable lows. For many years, moreover, a consensus has existed as to just when the biggest lows occurred: in 1970 when he followed Blonde on Blonde, John Wesley Harding, and Nashville Skyline with the mishmash called Self Portrait; and from 1979 to 1981, when he embraced Christianity and issued a trio of albums dominated by gospel music and religious lyrics. True, the first of these LPs, 1979’s Slow Train Coming, was a chart hit that also garnered some excellent reviews; but Dylan’s concerts during the period, which initially eschewed all of his classic material, drew criticism; and both Saved (1980) and Shot of Love (1981) failed critically and commercially. The critics “wouldn’t allow the people to make up their own minds,” Dylan later complained. “All they talked about was Jesus this and Jesus that.”

In 2013, Columbia issued Another Self Portrait (1969–1971): The Bootleg Series Vol. 10, which shed a more positive light on the Self Portrait period. Now comes Trouble No More: The Bootleg Series Vol. 13/1979–1981, which is clearly designed to do the same thing for the era that it covers. Consisting almost entirely of previously unreleased recordings (the sole exception being “Ye Shall Be Changed,” which debuted in the first Bootleg Series box), this anthology focuses mostly on live material. In the deluxe edition, two discs feature tracks from shows in 19 cities; another two collect the best performances from three 1980 Toronto concerts; two more preserve a single London gig from 1981; and an additional two present tracks culled from soundchecks, rehearsals, and studio tapes. Fourteen of the songs in the box have never previously been released in any version.

There’s more: a DVD collects 1980 concert performances from the period, including a high-spirited “Precious Angel” and a soulful duet with Clydie King on “Abraham, Martin, and John,” the Dion hit. And the package incorporates two hardcover books, which offer essays about the music, rare photos, and an annotated tracklisting.

Let’s cut to the chase: if you’re a Dylan fan, the box is worth buying. No, nothing here alters my belief that 1979 to 1981 will not be remembered as one of his most creative, innovative phases. And there’s no getting around the fact that many of Dylan’s gospel compositions just aren’t very good; indeed, “plodding” is the adjective that still comes to mind when I sit through numbers like “Man Gave Names to All the Animals,” “Are You Ready?,” and “Solid Rock.” Nevertheless, Dylan’s passion remains evident throughout, and the box does include more great music than I expected it would.

The best compositions from the period’s studio albums—including “Precious Angel,” “I Believe in You,” and “Every Grain of Sand”—sound better than ever in the multiple live versions here. Other gems include a couple of very alternate readings of the epic, enigmatic “Caribbean Wind,” which previously appeared only on the old Biograph anthology; and “Making a Liar Out of Me,” one of the compositions that has not been available until now in any version.

The best compositions from the period’s studio albums—including “Precious Angel,” “I Believe in You,” and “Every Grain of Sand”—sound better than ever in the multiple live versions here.

Excellent readings of some pre-1979 gems are here, too: for a while, as noted earlier, Dylan would perform only his religious material (reportedly prompting fans at his concerts to hold signs reading “Jesus loves your old songs”), but he had returned to his rich catalog by the time of the London gig featured in this set, which yields “It’s All Over Now, Baby Blue,” “Just Like a Woman,” “Like a Rolling Stone,” “Mr. Tambourine Man,” “Knockin’ on Heaven’s Door,” and other early-career classics.

The DVD is a little strange, as it intersperses concert material with sermons by writer Luc Sante that are delivered by actor Michael Shannon, who is billed as “The Preacher.” (At his shows during this time, Dylan himself sometimes offered sermonettes.) I sat through all of Shannon’s rants before discovering a menu option that allowed me to skip them and play only the music, at least some of which is first-rate.

Among the essays in the accompanying books, the one that resonates most with me is by Penn Jillette (of Penn & Teller), a self-described lifelong atheist and lifelong Dylan fan, who, like me, loved Blonde on Blonde and the seriously underrated Street Legal but didn’t even listen to Saved and Shot of Love when they came out.

As I’ve mentioned, Jillette and I weren’t the only ones who tuned out Dylan’s Christian music. In fact, his record label acknowledged a backlash in an unusual 1980 radio ad included with this box. “I was kinda disappointed,” says one fan in the ad. “I wanted to hear rock and roll. I heard Bob Dylan singing gospel. I didn’t come here to hear sermons.” Complains another: “I want the old Bob Dylan, the one I know and love, and that wasn’t him.”

If such gripes sound familiar, it’s probably because they echo the sort of comments we heard from some quarters when Dylan went electric, when he turned to country, and, much more recently, when he started exploring Frank Sinatra’s music and the Great American Songbook. For more than half a century now, Dylan has to his credit tuned out such criticism and followed his muse wherever it has led him.

As for Penn Jillette, he says he still disagrees with the theological content of Dylan’s 1979–1981 recordings but now appreciates the fervor with which it is delivered and the quality of much of it. And he wonders why he never had trouble appreciating, for example, Bach’s St. Matthew’s Passion and Ray Charles’s version of “Amazing Grace” while rejecting Dylan’s religious music for so long. He doesn’t really have an answer for that, but he’s listening now. So am I.

Jeffrey Martin, One Go Around. Portland, Oregon-based Jeffrey Martin—who sounds like a slightly depressed version of John Prine—has the perfect weather-beaten voice for this album’s arresting, poetic tales of the downtrodden and the desperate. As titles like “Poor Man,” “October Dark,” and “Hand on a Gun” hint, these often politically tinged folk songs don’t always take us to a happy place. But Martin, a high school creative-writing teacher by day who wrote all but one of the numbers, draws his characters with warmth and compassion and sums up situations with evocative, tightly honed verse. Among the best songs on this album: “Billy Burroughs,” which describes the drunken party at which author William Burroughs killed his wife; “Long Gone Now,” in which the singer tells an old girlfriend that he “left your photograph with my pride in a bar on the upper east side”; and “Sad Blue Eyes,” which Martin begins by singing: “He grew up in a house in the valley with a daddy who was one long cigarette / And his mama walked out on a Friday night with a man that she just met.”

Rusty Young, Waitin’ for the Sun. After half a century as a recording artist, Rusty Young has finally gotten around to recording his first solo album. His career began in 1967, when he played steel guitar on Last Time Around, the final Buffalo Springfield LP. After that, he co-founded the country/rock band Poco with Richie Furay and Jim Messina. Young spent 45 years with that group before announcing his retirement in 2013. Luckily, the retirement didn’t last, because Waitin’ for the Sun is worth having. There are a few throwaways here, but well-hooked and well-sung tracks like “Innocent Moon,” “My Friend,” and the sax-spiced “Heaven Tonight” variously recall Poco and the Eagles at their best.