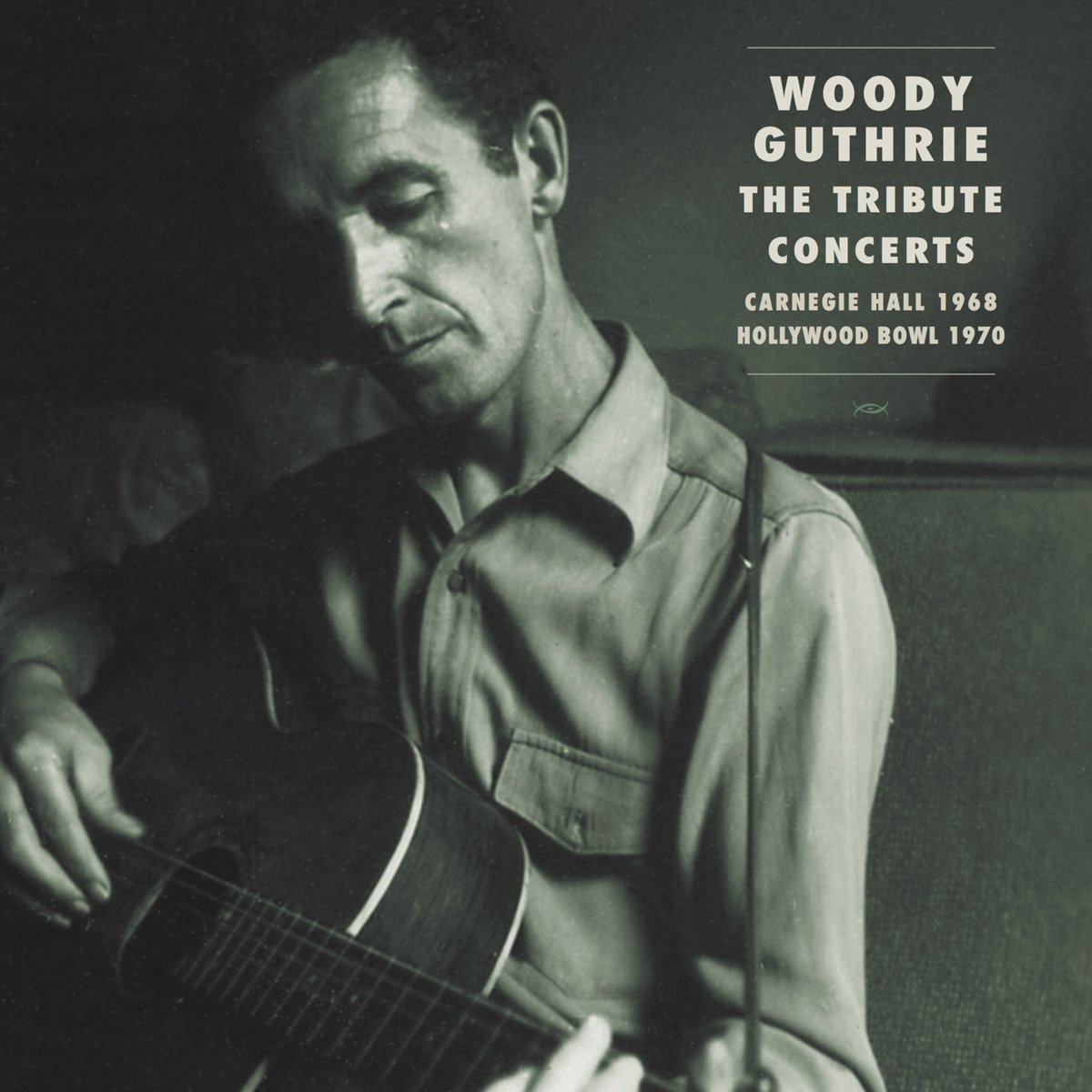 The Germany-based Bear Family label doesn’t tend to put words like “ultimate” and “super deluxe” in the titles of its box sets, but if any record company should be entitled to employ such adjectives, it’s this one. Its boxes are typically lavishly packaged, often with hardcover books, and mind-bogglingly comprehensive. They’re not cheap, but none of them will leave you complaining about audio quality or a lack of extras, and certainly not about missing tracks.

So it is with the superb new Woody Guthrie: The Tribute Concerts, which documents an extraordinary pair of shows. The first took place in January 1968, less than four months after the death of the massively influential singer/songwriter, at New York City’s Carnegie Hall; the second happened in 1970 at the Hollywood Bowl in Los Angeles. The shows featured similar but not identical lineups that included such giants of the folk world as Joan Baez, Pete Seeger, Odetta, Tom Paxton, Richie Havens, Guthrie’s son Arlo, and Bob Dylan (whose three-song performance at the 1968 concert marked his first public appearance since his motorcycle accident a year and a half earlier). The programs embraced heartfelt, moving covers of many of Guthrie’s most beloved songs, among them “Pastures of Plenty,” “Do Re Mi,” “I Ain’t Got No Home,” “Pretty Boy Floyd,” “Roll On Columbia,” and “This Land Is Your Land” (including its often-omitted, most incendiary verse). The Band provided backup at the New York show while the L.A. event featured a house band that included a young Ry Cooder and the Flying Burrito Brothers’ Chris Ethridge.

In a rare display of cooperation, the Warner Bros. and Columbia labels jointly issued a double album in 1972 that offered highlights from both shows on 35 tracks. Proceeds from the album—like those from the sold-out concerts, for which the artists donated their performances—went to research to fight Huntington’s disease, the illness that killed Guthrie.

Taken together, the material in this Bear Family box makes clear exactly what Guthrie stood for and why he remains so relevant today.

Now, Bear Family has gone back to the original tapes for this three-CD, nearly four-hour-long package, which includes the entire 33-track 1968 event and the complete 45-track 1970 event, with performances presented in the order they originally occurred and with poignant between-song narration culled from Guthrie’s writings. Here, too, are 22 tracks of separately recorded reminiscences from the participants and others. (Among those tracks: a sad rant from the great but increasingly disturbed Phil Ochs, who—speaking a few years before his suicide—expresses great bitterness about his exclusion from the concerts.)

Also in the box—which Guthrie’s daughter Nora coproduced—are two well-illustrated hardcover books. One features music and lyrics for nearly all the tunes, some song notes by Guthrie, and a biographical essay by the late screenwriter and Almanac Singers member Millard Lampell. The other includes essays about Guthrie by such esteemed writers as Sean Wilentz; photos of each concert by renowned photographers like David Gahr and Jim Marshall; contemporaneous reviews of the shows; memories of people who were there; notes about the artists; Bob Dylan’s lengthy poem, “Last Thoughts on Woody Guthrie”; and production notes.

Taken together, the material in this Bear Family box makes clear exactly what Guthrie stood for and why he remains so relevant today. As Wilentz notes in his essay, “Although times have changed, in many ways for the better, not so the good and evil, bravery and cowardice, generosity and injustice that Woody and his friends and followers sang about. What is so striking in these recordings…is the timelessness of what Woody was getting at in his deceptively simple art.”

Indeed. Just listen, for example, to the often-covered “(Deportee) Plane Wreck at Los Gatos,” offered here in versions by Joan Baez and Judy Collins, which bemoans the plight of Mexican migrant workers, the illegal and the unwanted, who “grow our big orchards and grow our good fruit,” then die, having been “called by no name except deportees.” Guthrie composed that lyric more than 60 years ago; unfortunately, it could have been written yesterday.

Chris Barron, Angels and One-Armed Jugglers. Chris Barron, best known as the lead singer of the Spin Doctors, takes lots of chances on this well-sung solo album, and most of them pay off. Reportedly, the CD was originally supposed to be a stripped-down acoustic effort, and in fact, the intros to several tracks fit that description, but Barron quickly introduces everything from accordion to slide trumpet. A few of the songs sound redolent of the Spin Doctors, but some of the best ones head in other directions; there’s a heavy pop flavor here, plus hints of jazz and folk. As for the lyrics, Barron sums them up well on his website: “It’s about the cocktail party at the apocalypse, the decline of the American empire…But it’s very personal too, and there’s a lot of my own sadness in there…But there is still wonder. And there’s still a twist of comedy.” All those elements come together in songs like “Till the Cows Come Home,” about love in a faulty world, and “Still a Beautiful World,” a sort of eyes-wide-open companion to Louis Armstrong’s “What a Wonderful World.”

Rob Williams, An Hour Before Daylight. Singer/songwriter Rob Williams, who hails from Richmond, Virginia, makes a strong impression with this lilting, lyrically rich latest solo album, which includes 10 originals plus a memorable cover of Lucinda Williams’s “Blue.” Accompanying himself on guitar and backed by keyboards, vibraphone, marimba, drums, and assorted other instruments, Williams tells stories that captivate and ring true. In “Don’t Want to Love You,” for example, he sings of a girlfriend who leaves to marry “this S.O.B.,” then calls him on her wedding night “a little drunk or a little high and asked if I had anything to tell her.” She called again after the marriage went to hell, Williams recalls, and you keep listening not only because the music is good but because you want to know how he responded.