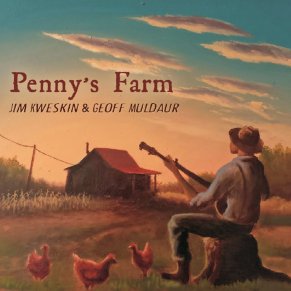 Jim Kweskin and Geoff Muldaur, Penny’s Farm. This is the next best thing to a reunion of Kweskin’s influential Jug Band, which produced half a dozen fine albums between 1963 and 1967: a collaboration by its prime movers, Jim Kweskin and Geoff Muldaur. A crew that includes Van Dyke Parks offers backup on steel guitar, string banjo, accordion, fiddle, penny whistle, and more, but this is primarily a vocal and finger-picking acoustic guitar affair. The program mines traditional folk and blues, learned from such sources as the classic Harry Smith Anthology of American Folk Music, and Alan Lomax’s field recordings. Highlights include the wistful “Tennessee Blues”; Mississippi John Hurt’s murder ballad, “Frankie,” which Kweskin and Muldaur recorded live in Germany; and “Fishing Blues,” which you may know from the version by the Lovin’ Spoonful’s John Sebastian (who contributed liner notes here).

Audrey Spillman, Thornbird. Spillman’s sultry vocal work reminds me a bit of Shelby Lynne and also of the great Dusty Springfield. You’ll find more than a few gorgeous love songs on this album, including the lush “Pull Me into Your Harbor”; “I’ve Got to Have You,” a duet with Kris Kristofferson; and a strong cover of Skeeter Davis’s mournful 1963 smash hit, “The End of the World.” I wouldn’t be surprised if many artists wound up recording some of the new material here, especially the spellbinding “Don’t Make Me Walk Through This World on My Own,” which Spillman’s husband and producer Neilson Hubbard cowrote. I would be surprised, however, if any such covers outshined the fine versions on Thornbird.

West Philadelphia Orchestra, Tour de Filli. Yes, this outfit hails from Philly but their music’s roots are about 5,000 miles from there. Vocalist Petia Zamfirova, a Bulgaria native, leads the outfit, singing up a storm in English, Bulgarian, and Romani. The high-energy performances here—which feature trumpets, clarinets, alto and baritone saxes, accordion, and a couple of drum sets—creatively mix Balkan brass with modern jazz, funk, and more. The album is exhilarating, consistently captivating, and loaded with surprising twists and turns. Hang onto your seat for the rollercoaster ride or, better yet, get up and dance.

Fernando Viciconte, Live at the Belly Up. As I reported a while back, the Belly Up music clubs in Solana Beach, California (near San Diego) and Aspen, Colorado have been selling downloadable recordings of their concert performances at belluplive.com. One of the latest features Fernando Viciconte, an Argentinian native who now lives in Portland, Oregon and has previously released eight CDs. The July 2016 set is brief—just nine songs and 35 minutes—but its impeccably crafted, frequently haunting performances were enough to win me over. The show includes songs from four of Viciconte’s albums, including 2015’s critically acclaimed Leave the Radio On, as well as a cover of “Three Sheets to the Wind,” a stoner’s lament from the late Portland musician Jim Boyer. Viciconte, who plays acoustic guitar, is accompanied here by Dan Eccles, whose electric guitar inventions add intensity to already intense vocal work.

Thor & Friends, Thor & Friends. Here’s proof that the music explosion in Austin, Texas has extended way beyond outlaw country, folk, and Americana: Thor & Friends, a trio based there, seem most influenced by experimental minimalist composers like Steve Reich and Terry Riley. Employing everything from marimba, vibraphone, and clarinet to xylophone Mellotron, and castanets, they create dreamy improvisational soundscapes on this likable debut album. Ethereal instrumental tracks like “White Sands,” “12 Ate,” and “Jordan’s Song” aren’t about to show up on Top 40 radio, but if you’re looking to float away on clouds of sound, these might just be the clouds for you.