How good were the Turtles? At their best, so good that they couldn’t screw things up even when they tried.

After they topped pop charts with 1967’s addictive “Happy Together” and made the Top 10 with songs like “It Ain’t Me, Babe” and “She’d Rather Be with Me,” their struggling independent label, White Whale, started bugging them to deliver another No. 1. They responded in 1968 with “Elenore,” which the group’s Howard Kaylan later called a parody of “Happy Together” and “an anti-love letter” to the record company and which contained such not-exactly-profound lyrics as “Gee, I think you’re swell / And you really do me well / You’re my pride and joy, et cetera.”

Said Kaylan: “It was my feeling that they [White Whale’s executives] would listen to how strange and stupid the song was and leave us alone. But they didn’t get the joke. They thought it was a straight rock song and it sounded good to them.”

In fact, it sounded good to a lot of people. It didn’t quite make No. 1, but it spent nine weeks on the charts and reached No. 6. Not bad for a joke.

Much of the group’s other work seems a bit tongue-in-cheek, as well, and the humor continued even after their breakup, when Kaylan and Mark Volman, the Turtles’ frontmen, joined Frank Zappa’s Mothers. On that group’s Fillmore East June 1971 release, the Mothers’ suddenly shift gears to deliver a completely incongruous “Happy Together.” You can almost hear Kaylan and Volman laughing.

Besides humor, another ingredient of the Turtles’ success was the quality of their best material. They could write, but mostly, they relied on outside composers, and boy, could they pick ’em. Early on, they recorded songs by the late, great Warren Zevon and Judee Sill. Other tracks came from Bob Dylan, Harry Nilsson, the Byrds’ Roger McGuinn and Gene Clark, and such Top 40 powerhouses as Steve Barri, P.F. Sloan, and Gerry Goffin and Carole King, as well as Gary Bonner and Alan Gordon, who contributed some of the Turtles’ biggest hits.

It’s difficult to imagine them performing at an event like Woodstock. But they could have fit in at Monterey Pop, which made room for such other Top 40 radio bright spots as the Mamas and Papas and the Association.

One of the more versatile pop groups of their time, the Turtles began in folk-rock, then opted for an equally compelling but more Top 40-oriented sound; and later they flirted with everything from country to psychedelia. Kaylan and Volman were both first-rate lead singers, and the group were capable of gorgeous vocal harmonies.

They never strayed far enough from commercial pop to rank with such contemporaries as, say, the Byrds and Jefferson Airplane, and it’s difficult to imagine them performing at an event like Woodstock. But they could have fit in at Monterey Pop, which made room for such other Top 40 radio bright spots as the Mamas and Papas and the Association. 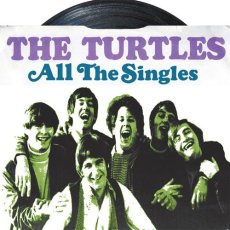 The bulk of the Turtles catalog has been out of print for some time, with only a few hits packages available. But that’s about to change, thanks to a pair of comprehensive new collections, both of which draw their material from original master tapes. The 50-track, two-disc All the Singles delivers on its title and then some, with A and B sides of every Turtles single, including several that the group only thought about releasing. A couple of unlisted bonus tracks find the group singing their way through commercials for Pepsi and the Chevy Camaro. Granted, there are some clunkers here, including “Christmas Is My Time of Year,” possibly one of the worst-ever songs about the holiday, and “Can’t You Hear the Cows,” the kind of track you put on a B side when you can’t come up with anything to put on a B side; but there are also more than a few well-hooked hits, plus lots of should-have-been-hits.

For those who want to dig deeper, there’s The Complete Original Album Collection, a six-CD box set that includes the half-dozen Turtles LPs released between 1965 and 1970 plus a wealth of bonus material, some of it previously unavailable. The first three albums appear here in both stereo and mono, and not surprisingly the stereo sounds richer; but for those who want to conjure up the past, the mono delivers exactly what issued from car radios in the 1960s.

Here’s a closer look at the box, which shows how uneven the Turtles could be but also how potent a pop force they were at their best:

It Ain’t Me, Babe. Released in October 1965, only about two years after the group’s members finished high school, this album finds the Turtles mining jingle-jangle folk-rock territory. In addition to the title track, which provided their first hit, the record offers two other amiable Dylan covers: “Like a Rolling Stone” and Love Minus Zero.” Also here are a fine reading of P.F. Sloan’s “Eve of Destruction,” a recent chart-topper for Barry McGuire; and “Let Me Be,” the group’s catchy second hit, which sounds like Sloan and Barri’s attempt to write a follow-up to “It Ain’t Me, Babe.” Not everything here is memorable—“Glitter and Gold” ranks with Mann and Weill’s fluffiest songs, for example, and “Let the Cold Winds Blow” has to be one of most inane protest songs ever—but the bulk of this album serves notice that the Turtles could evolve into major hit-makers.

You Baby. This 1966 LP, which followed the group’s debut by only six months, is notable mostly for its two pop/rock hits, both from Sloan and Barri: “Let Me Be,” which appears in the same version the first LP featured, and the title cut. Much of the rest of this program sounds ill-conceived, including “House of Pain,” a pseudo-blues, and “Down in Suburbia,” a protest number by Bob Lind (of “Elusive Butterfly” fame) that lyrically recalls “Pleasant Valley Sunday” and that makes the Monkees’ rather inane song seem weighty by comparison.

Happy Together. Arguably the group’s best album, this 1967 release presents a revamped lineup and some of the Turtles’ most infectious, radio-ready material, including Bonner and Gordon’s upbeat title cut, their only chart-topper; and the similarly styled “She’d Rather Be with Me,” which went to No. 3. There are a few losers: “Rugs of Woods and Flowers” sounds like something from a bad Broadway musical and “A Guide for the Married Man,” from the film of the same name, is downright embarrassing. But the album also offers some little-known pop gems. “Me About You” and “Makin’ My Mind Up” are almost on a par with the LP’s hits and “Think I’ll Run Away” and Zevon’s “Like the Seasons” rank among the group’s prettiest ballads. 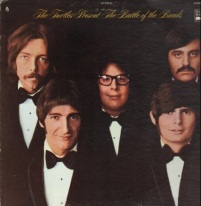 The Turtles Present the Battle of the Bands. The Turtles display hints of humor and strangeness on their first three albums but it’s on 1968’s largely self-penned Battle of the Bands that they get really weird. Pretending to be a variety of outfits, with names ranging from The Atomic Enchilada to Nature’s Children, the group deliver everything from country to pop to surf music to psychedelia. The versatility is impressive but the album is predictably rather less than cohesive and some it works better as a spoof than as music. There are some big exceptions, however, including the LP’s two Top 10 hits: the aforementioned “Elenore” and the dreamy “You Showed Me,” which the Byrds’ Roger McGuinn and Gene Clark composed. The nine bonus tracks include “She’s My Girl,” a non-album hit single by Bonner and Gordon. There are also outtakes from Battle of the Bands that sound like parodies of psychedelic music.

Turtle Soup. Produced by the Kinks’ Ray Davies, 1969’s Turtle Soup finds the group making a bid for greater respectability with their first all-originals program. The music is mostly more adventurous and less poppy than the early hits, but the bulk of it fails to catch fire. When the Turtles stick to the old formula on tracks like “You Don’t Have to Walk in the Rain,” however, the results rank with their hits. You’ll also find a few winners among the dozen bonus tracks.

Wooden Head. Though the group and their label called it quits in 1970, shortly after Turtle Soup failed to yield any significant hits, producer Bones Howe collected 11 of their then-unreleased early recordings on that year’s Wooden Head. This odds-and-ends package turns out to be one of the band’s best albums, because it finds them doing what they do best: delivering upbeat, well-hooked pop-rock. The 13 bonus tracks here include the exquisitely crafted non-album hit single “You Know What I Mean” as well as 1967 stereo mixes of “You Baby” and “It Ain’t Me, Babe.”

Clearly, the Turtles had their ups and downs. But the ups were notable and numerous, and you’ll find them all on these well-conceived and well-packaged new releases.