Bob Dylan’s Bootleg Series—his outlet for alternate versions, outtakes, rare live performances, previously unheard songs and more—has delivered some fantastic music since its inception in 1997. In the past two years alone, we’ve been treated to Another Self Portrait and The Basement Tapes Complete, both of which were revelations. But nothing in the series’ first 11 releases outshines the new The Cutting Edge 1965–1966, The Bootleg Series, Vol. 12, which takes us inside the studio for the sessions that produced Bringing It All Back Home, Highway 61 Revisited and Blonde and Blonde.

“The purpose of The Cutting Edge,” according to the accompanying 120-page hardcover book, “is to illuminate what happens in the studio on the way to making a record. In keeping with that aesthetic, there was no attempt made at creating finished, glossy recordings. What’s presented here is the sound you might have heard in the control booth at the end of a day at CBS studios.”

Indeed, the set includes lots of false starts, comments by the producers and spoken asides by Dylan, all of which contribute to the you-are-there ambiance. And where you are is where few have been: the vast majority of the material has been unavailable until now, though the producers of this set opted to include several recordings that have been issued previously, in order “to better represent Dylan’s creativity during this period.”

And what a period it was. Bringing It All Back Home, Highway 61 Revisited and Blonde and Blonde are widely—and justifiably—regarded not only as three of Dylan’s best albums but as three of the finest records of the entire rock era. And he recorded them all in a mere 14 months, from the beginning of 1965 through February of the following year.

Listening to many outtakes collections, you understand why the performances didn’t make the final cut: they’re simply inferior to the ones that did. That’s true of some of the selections in this package. But many of the tracks are as good as what Dylan ultimately issued—just different, usually in intriguing ways. And even the readings that don’t quite measure up to the original album cuts will fascinate anyone who wants to dig deeper into the process by which Dylan develops his material.

Disc one of this package focuses on the Tom Wilson-produced sessions for Bringing It All Back Home, a dazzling mix of rock and acoustic folk that Dylan recorded in a jaw-dropping three days. We hear him shuffling lyrics until he achieves just the right effect in multiple versions of classics like “Love Minus Zero/No Limit,” “She Belongs to Me,” “Subterranean Homesick Blues” and “Bob Dylan’s 115th Dream.” Also here are the affecting “I’ll Keep It With Mine,” the playful “If You Gotta Go, Go Now” and the obscure “You Don’t Have to Do That,” none of which made it onto the LP.

Disc two opens with more from the Bringing It All Back Home sessions: “California,” a previously unreleased song with a verse that found its way into “Outlaw Blues”; the first take of “It’s Alright, Ma (I’m Only Bleeding)”; and two compelling versions of “Mr. Tambourine Man,” including one with drums and electric guitar. (What isn’t here is interesting, too: there are no alternate versions of “Gates of Eden” and “Maggie’s Farm” for the simple reason that they apparently don’t exist. Dylan nailed these classics in first takes.)

Then come the Bob Johnston-produced sessions for Highway 61 Revisited, which find Dylan moving further into rock while simultaneously reinventing the genre. There are multiple renditions of bluesy gems like “It Takes a Lot to Laugh, It Takes a Train to Cry,” “Tombstone Blues” and “From a Buick 6,” plus an electrified reading of the poetic tour de force “Desolation Row.” Also here are several alternate takes of the non-album single “Positively Fourth Street,” which winningly combines the jingle-jangle of “Mr. Tambourine Man” with the venom of “Like a Rolling Stone” and which, as the liner notes point out, is one of the few rock-era hits to eschew standard verse-chorus structure.

The compilers devote all of disc three to the creation of “Like a Rolling Stone”—probably Dylan’s most celebrated song and the one that brought his work to the masses—and if there’s a more fascinating rock CD out there, I don’t know what it is. The tune starts out as something close to a waltz with Dylan on piano, then evolves through 19 more takes, rehearsals, false starts and breakdowns until the artist and his producer finally realize they got what they needed back on take four—the one where Al Kooper first jumps in on organ, not the guitar he’d arrived at the studio hoping to play. (Don’t miss Kooper’s essay, included in the liner notes here, about how this happened.)

Disc four continues with the Bob Johnston-produced Highway 61 Revisited sessions. There are versions of the title cut, “Just Like Tom Thumb’s Blues,” “Queen Jane Approximately” and “Ballad of a Thin Man,” plus recordings with the Hawks (aka the Band) of “I Wanna Be Your Lover,” “Can You Please Crawl Out Your Window?” and an unnamed instrumental. As the disc ends, we hear the first of the material intended for Blonde on Blonde—“Visions of Johanna,” as recorded in New York with the Hawks.

The last two discs are all about that monumental album, which blends folk, rock, blues and country with enough surreal, incredibly imaginative lyrics to make you understand why Highway 61’s “From a Buick 6” found Dylan singing, “I need a dump truck, baby, to unload my head.” There are more Hawks renditions of “Visions of Johanna,” plus “She’s Your Lover Now” and “One of Us Must Know (Sooner or Later),” the only New York/Hawks track that made its way onto the final release. From the record’s subsequent Nashville sessions come renditions of “Fourth Time Around,” “Leopard-Skin Pill-Box Hat,” “Stuck Inside of Mobile with the Memphis Blues Again,” “Absolutely Sweet Marie,” “Just Like a Woman,” ”Pledging My Time,” “Most Likely You’ll Go Your Way (And I’ll Go Mine)” “Temporary Like Achilles,” “Obviously 5 Believers,” “I Want You” and “Sad Eyed Lady of the Lowlands.” Some of these, such as a speeded-up “Just Like a Woman,” differ radically from the arrangements with which we’re familiar. If, like me, you could spend all night quoting lines from the original versions of songs like these, you’ll be enthralled by the many ways the lyrics vary on these takes.

While all of this music still sounds as terrific as it did when it was recorded half a century ago, you may have to be of a certain age to appreciate just how revolutionary it was in its time. Today, Dylan’s influence is everywhere; but when he created these songs, he was in uncharted territory. The top five hits of 1964 were Bobby Vinton’s “There! I’ve Said It Again”; the Beatles’ “I Want to Hold Your Hand,” “She Loves You” and “Can’t Buy Me Love”; and Louis Armstrong’s “Hello, Dolly.” In 1965, the list included “Petula Clark’s “Downtown,” the Righteous Brothers’ “You’ve Lost That Lovin’ Feelin’,” Gary Lewis’s “This Diamond Ring,” the Temptations’ “My Girl” and the Beatles’ “Eight Days a Week.” There’s some good music on those lists, but nothing that seems to have issued from the same planet as, say, “Desolation Row” or “Visions of Johanna” or even the popular singles “Like a Rolling Stone” and “Positively 4th Street.”

For the casual Dylan fan (is there such a thing?), his label offers a two-disc version of this package called Best of the Cutting Edge. For fanatics, there’s a $599 18-CD Collector’s Edition (limited to 5,000 copies) that delivers every note recorded in the sessions on 379 tracks, plus nine original mono 45 rpm singles, rare hotel-room recordings and other goodies. For the rest of us, there’s this six-disc, 111-track box, which includes the aforementioned book plus more than seven hours of music from some of the most amazing and influential sessions in the history of rock and roll. 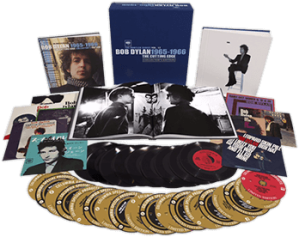