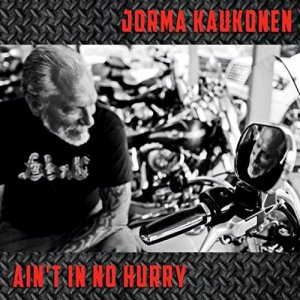 You’d think the holidays were still approaching to judge by the number of new CDs that have piled up on my desk lately. I inevitably wind up giving the most ink to big-name performers, but albums from many lower-profile acts obviously merit attention as well. Here’s a look at 10 that have caught my ear lately.

Ain’t in No Hurry, Jorma Kaukonen. Like Kaukonen’s earlier solo CDs, this mellow treat is less reminiscent of his Jefferson Airplane days than of his work with Hot Tuna (whose Jack Casady guests here). That means blues-tinged folk of the highest order. Highlights include the touching “In My Dreams”; a violin-spiced cover of the Depression-era chestnut “Brother Can You Spare a Dime?”; and the lilting title cut, which sounds to me like a reflection on the impermanence of life.

The Fire’s Heart, by Seahorse. This highly listenable second album spotlights Rich Swanger, an excellent Oregon-based folksinger/songwriter, and his capable backup group. Swanger applies his distinctive vocals to a set of self-penned meditations and fairytales.

Ionia, by Lindsay Lou & the Flatbellys. This auspicious debut is being tagged as roots, Americana and bluegrass—all true—but I also hear more than a hint of jazz. The eclectic program owes much to the fine vocalizing of lead singer Lindsay Lou.

Almost There, Jeffrey Pepper Rodgers. Playful titles such as “I’ve Got It Here Somewhere” and “Enough About You (What About Me)” hint at the program of this acoustic folk package of topical, often lighthearted songs. Rodgers has a way to go before he equals Loudon Wainwright III, whom he sometimes recalls, but he does bear watching.

Devil in the Seat, Foghorn Stringband. The eighth album from this quartet delivers the goods to anyone who appreciates traditional string- and banjo-based country and folk. The program ranges from Nashville (Hank Snow’s “90 Miles an Hour”) to gospel (“Looking for a Home”) to British folk “(“What Will We Do”). If you’ve got a place in your heart for country legends like the Carter Family and Bill Monroe, this is a safe bet.

Stumpjumper, Charlie Parr. This label debut from Parr, who performs on acoustic guitar, banjo and dobro, features 10 originals plus “Delia,” the old murder ballad. These folk and blues tracks have a timeless feel; they almost sound as if they could fit in on Harry Smith’s classic Anthology of American Folk Music.

Anna & Elizabeth, Anna & Elizabeth. Here’s another one that seems like something out of Harry Smith’s collection. Anna Roberts-Gevalt and Elizabeth LaPrelle focus on traditional Appalachian mountain music. Beautifully sung and played, this debut album is a must for anyone who counts Jean Ritchie, Alice Gerrard or the Carter Family among their favorites.

Whispering to the Wind, Arthur Davenport. This is the newest release from the Hawaii-based Davenport but it isn’t new: it’s been around since 2010, and Davenport told me in an e-mail it will be his last album unless it gains more attention than it has to date. That would be a shame because this full-band outing shows him to be a noteworthy talent. I prefer the earlier (2002) Reality Bends to this release, however: while arguably less commercial, it keeps the focus on Davenport’s rich vocals and thoughtful lyrics and reminds me of recordings by such artists as Cat Stevens and Ralph McTell.

A Wanderer I’ll Stay, Pharis & Jason Romero. This is a terrific collection of folk originals from a British Columbia-based husband-and-wife duo who have performed on A Prairie Home Companion. Strengths include Pharis’s full-bodied, mournful vocals and a program that mixes traditional folk songs like “Cocaine Blues” and “It’s a Sin to Tell a Lie” with passionately sung originals like the title cut. Sometimes moving, sometimes just plain fun, it is always impressive.