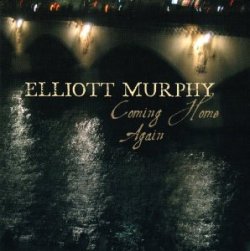 Packed with blistering anthems and effusive ballads, Elliott Murphy’s 29th album ranks among his best, but you may have to play it several times to realize that. Nothing here seems likely to grab listeners as quickly as, say, 2002’s hook-laden “Come on Louann,” and none of the rockers pack the immediate wallop of early gems like “Drive All Night.” The new songs will definitely grow on you, though. Murphy’s vocals on numbers like the plaintive “Losing It” make a strong case for him being one of rock’s most underappreciated singers and Olivier Durand’s guitar work throughout the album makes clear why Murphy has worked with him for so long. An occasional lyric sounds as off-the-cuff as Bob Dylan’s “Clothes Line Saga” and a few lines seem as cryptic as those on. But like Dylan, Murphy fills his songs with deft imagery and wordplay, and they’re interesting even when you’re not entirely sure how they add up.