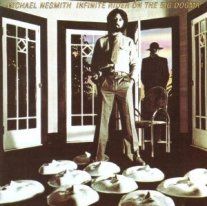 Michael Nesmith happens to be a former Monkee. But unlike his one-time cohorts, he also happens to be quite talented. You’ll find evidence of that in his songwriting—which has resulted in such delights as the Stone Poneys’ “Different Drum”—and throughout much of this latest solo album.

Granted, the artist bares considerable limitations on the new Infinite Rider on the Big Dogma. He isn’t exactly a great vocalist; in fact, quite a lot of the “singing” here sounds suspiciously like animated talking. In addition, Nesmith is more a journeyman than a trailblazer; his mainstream FM rock recalls numerous other acts and evidences no major innovations.

But if the artist is far from being a Dylan or Springsteen, he’s just as far from being incompetent. The production and mix on Infinite Rider prove absolutely splendid, The instrumentation, particularly by saxophonist Tom Saviano, is pleasant or better throughout; and though a few of the lyrics are below par, you’ll find much to enjoy in originals like “Cruisin’,” a cognent vignette about L.A. street people, and the lilting “Magic,” which recalls the Four Seasons’ “December, 1963 (Oh What a Night).”