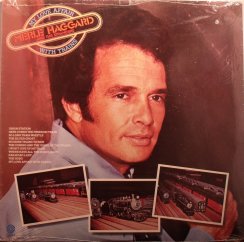 Merle Haggard’s “love affair with trains” did not originate in a recording studio. The son of a railroad man and owner of one of the world’s largest model train collections, the singer grew up in a converted boxcar and spent much of his adolescence riding the rails.

That he managed to imbue this concept album with the flavor of his experiences accounts for a large share of its appeal. But the production and fiddle-spiced backup prove as satisfying as the heartfelt vocal work. And the diverse, imaginatively chosen material is a big plus as well.

Wisely eschewing such frequently covered songs as “Orange Blossom Special,” Haggard spotlights a crop of equally potent but more obscure tracks. The lion’s share of them, including Ronnie Reno’s “Union Station,” Red Lane’s “The Coming and the Going of the Trains” and the singer’s own “No More Trains to Ride,” eloquently lament the railroads’ increasingly anachronistic role in American life. Also on the menu are two fine songs about hobos and Sterling Whipple’s attractive “The Silver Ghost,” which constitutes a sort of trainman’s equivalent of the trucker’s “Phantom 309.”

The album does exhibit a few flaws. While interesting on the first couple of listens, for example, Haggard’s between-song monologues can soon become an irritant. And Stephen Lemberg’s metaphoric “Here Comes the Freedom Train,” which really has little to do with railroads, seems both out of place and platitudinous.

But these are minor objections. And the album, which winningly evokes a bygone era while consistently entertaining, can be heartily recommended.