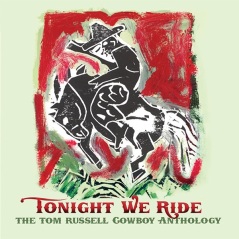 Tom Russell is so prolific that it’s hard to keep up: I have about two dozen of his albums, and I’m still missing a few. This pair of 2014 releases almost slipped by me.

Tonight We Ride, subtitled “The Tom Russell Cowboy Anthology,” is an updated version of Cowboy’d All to Hell, a 2010 collection of some of the artist’s best songs about horses, Indians, the Wild West and more. The 19-track CD incorporates five previously unreleased renditions, plus a duet with veteran folkie Ramblin’ Jack Elliott on “The Sky Above, the Mud Below.” Also here are readings of “Gallo del Cielo” and “Navajo Rug” that feature the great Canadian singer/songwriter Ian Tyson, who is clearly a kindred spirit. Other highlights include Russell’s lilting love song “The Rose of the San Joaquin” and “Alkali,” a sharply drawn portrait of a man “lost in the desert 25 years or more.” 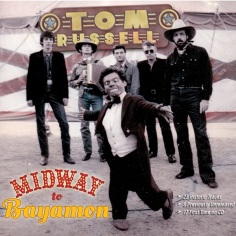 Midway to Bayamon collects remastered versions of 25 obscure live and studio tracks, mostly from the 1980s, including 15 numbers that previously appeared only on cassettes sold at gigs and eight that have never before been available in any format. Listening to many outtakes collections, you note shortcomings that explain why the material didn’t make the grade in the first place; but Russell apparently has to hold back tracks simply because he doesn’t have room to fit all the good stuff.

Gems abound here, including “Denver Wind,” a duet with Nanci Griffith that’s labeled a demo but that sounds rather perfect to me; a violin-spiced live reading of “William Faulkner in Hollywood” that features an extra verse; the aptly titled “A Cajun Lullaby”; the lively instrumental “Juarez, a Polka Town”; and “La Galue (The Glutton),” a 1985 performance around a campfire.

Though Russell has never managed more than a cult following, the reasons for that become harder to explain with every new release. In my view, he’s one of the best folk singer/songwriters of our time. You’ll find some of the reasons on these two discs.