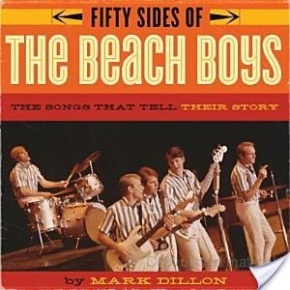 A cover blurb on this book promises a focus on 50 of the Beach Boys’ greatest songs, with the story of each told via an interview with someone connected to it. Inside, you will find chapters for that many tunes, each featuring quotes from someone who played on the record, produced it, was influenced by it or had some other connection to it. Fifty Sides doesn’t quite deliver on the touted concept, though, because in most cases, the song in question simply offers a jumping-off point to discuss an entire album or even a period of Beach Boys history. While some of the interviewees have lots to say, moreover, others play only minor roles in their chapters.

No matter. The book is a treasure trove of facts, trivia and insights and should prove fascinating to any serious Beach Boys fan. I’ve been closely following the group for about half a century but I found plenty of tidbits here that I hadn’t previously heard. For example, Brian Wilson originally intended to call “Good Vibrations” “Good Vibes” and use a chorus that went “I get good vibes, I get good vibes.” (His collaborator Tony Asher convinced him that “vibes” would make the song seem clichéd and trivial.) And speaking of that song, author Dillon notes that it lost out in the Grammies in 1966 for best rock recording of the year—to the New Vaudeville Band’s “Winchester Cathedral.” More proof of just how clueless the Recording Academy can be.

Granted, you have to be a bit of a Beach Boys fanatic to care about some of the trivia here, such as that Brian used not just one but two accordions on Pet Sounds or that “Here Today” inspired the organ break on Blood, Sweat & Tears’ “You’ve Made Me So Very Happy. ” And even a fanatic might not want to sit through a rather long discussion of the fact that some versions of “Sloop John B” find the group singing “I feel so break-up” while others have the line as “I feel so broke up.” There are also a few questionable side trips, such as when Dillon talks about the careers of people he quotes, even when those careers have nothing to do with the band at hand.

That said, I found this book engaging. It taught me a great deal while also reminding me of just how many phases the Beach Boys have been through. Like all good rock writing, also, it made me want to go back to the music.