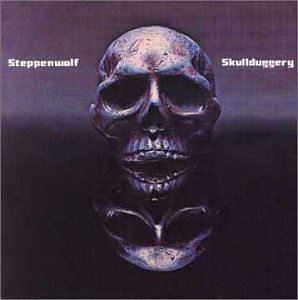 Announcing the supposed end of Steppenwolf in early 1972, group prime mover John Kay explained that “we were locked into an image and a style of music and there was simply nothing new for us to look forward to.” Two years later, after an apparent change of heart, Steppenwolf reformed. Unfortunately, though, its recent work has largely confirmed the wisdom behind the original decision to disband.

The majority of Skullduggery‘s eight tracks serve only to demonstrate the most vacuous side of the group’s raunchy rock style. “Life Is a Gamble,” “Pass It On,” and “Rock ‘n’ Roll Song,” for example, couple plodding, monotonous music to simplistic lyrics. And while “Sleepy” (penned by group bassist George Blondo) shows more potential, the tune ultimately constitutes little more than a catchy riff.

Unfortunately, while John Kay’s tunes once added significantly to Steppenwolf’s appeal, he plays a writing role on only one number here. Nevertheless—though most of these selections prove inferior—the bungling of several good tunes indicates that the group’s basic problem extends beyond its material.

In Holland/Dozier/Holland’s classic “(I’m a) Road Runner,” for instance, the band ostensibly has a perfect “Born to Be Wild”–styled showcase, but Steppenwolf’s clamorous reading, weighted down by perfunctory vocals, dull instrumentation, and a muddy production, lacks the punch of both the Motown original and the group’s similarly fashioned early hits. On Alan O’Day’s attractive “Train of Thought,” which seems equally well suited to Steppenwolf, a bad mix dampens the effect of counterpointed vocals and an unimaginative arrangement further limits the performance.

The energized remaining tracks—the band-authored instrumental “Lip Service” and the title cut, by lead guitarist Bobby Cochran—both meet their limited objectives. But two reasonably amiable songs do not a notable album make. And unless Kay and company can more consistently deliver on their next release, a permanent retirement may soon be in the offing.